Genshin Impact’s one year anniversary is fast approaching, and Mihoyo has lots of events planned for players, along with prizes and rewards. Some events are currently live, including a photo, fan art, and video contest.

Most of the Genshin Impact anniversary events kick off on September 28, one year after the game was first released. Since then, there have been many updates which have added new Genshin Impact characters and banners, as well as developing the storyline and opening up more of Teyvat with a whole new region – Inazuma. Although it doesn’t look like a new character is coming to the anniversary event, the Kokomi banner is now live; pull rates are boosted for this five-star character alongside four-star Beidou, Rosaria, and Xingqiu.

As part of the new anniversary celebrations, Mihoyo has detailed what rewards players can expect and the various events on offer over the coming weeks. The response from fans has been mixed concerning the highly anticipated events and rewards from the anniversary, especially as there aren’t currently any in-game events planned. For now, here are all the planned Genshin Impact anniversary events and rewards.

Here are all the Genshin Impact one year anniversary events:

This looks like it will be a slideshow of your time spent in Genshin Impact and the journey you’ve undertaken thus far.

“A Message in Time” – Web Event

You can take part in a raffle by creating your own anniversary cards. Participants are randomly selected to win the prizes below.

You can participate in this social media giveaway through the official Genshin Impact social accounts on either Facebook or Twitter. 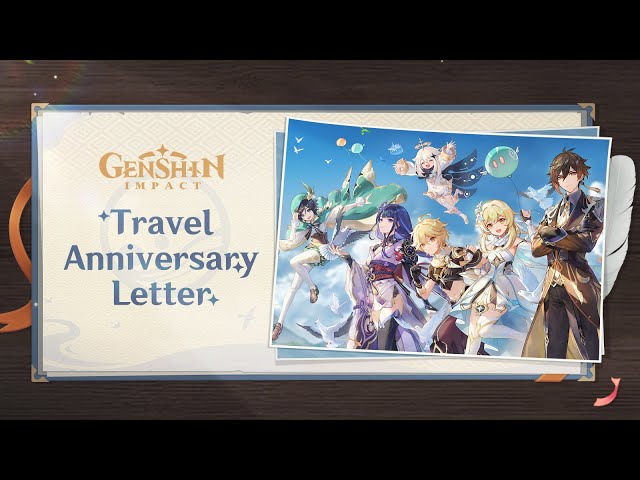 Although we don’t know what this event will be, it will take place across Genshin Impact’s social accounts.

“The Promise of a Worldly Encounter” Cosplay Submission Contest