Looking for the best Genshin Impact Rosaria build? The newest character has arrived in the Genshin Impact 1.4 update. She is a Cryo based four-star character, and is a frosty DPS dealer. Rosaria has been part of Genshin Impact for a while as an NPC, but she’s now a playable character.

So what exactly is her deal? Well for one, she is a member of the Church of Favonius in Mondstadt, the big town with giant windmills you visit towards the beginning of Genshin Impact. She’s also got a rather interesting definition of piety, seems somewhat selfish, and refuses to attend choir practice on the grounds that she finds it boring.

But as a fighter, this pale nun has some great skills and is perfectly capable of dealing all the Cryo-based Genshin Impact element damage you’ll need. We’re confident that, even though she’s not the best, Rosaria will be a great fit onto any team that needs some more Cryo damage; to get the most out of her icy skills, here’s the best Genshin Impact Rosaria build.

Rosaria’s release date was April 6. She was released as part of the Farewell of Snezhnaya event wish, which also contains a Childe rerun. The Rosaria banner release time was 6pm server time – this is at 3pm PST / 6pm EST on North American servers, and 6pm BST on European servers.

While you could spec Rosaria into a support build, she is a much more adept physical damage dealer, and when talking about the best Rosaria build, it would be silly not to at least talk about her signature weapon: the Dragonspine Spear.

This weapon has a high base attack and physical damage bonus, meaning that she’s capable of landing some very hard hits. Its Frost Burial perk has a 60% chance of dropping an Everfrost Icicle on top of enemies whenever Rosaria lands a normal or charged attack. Normally this hits for 80% of Rosaria’s attack stat. However, if the enemy is affected by the Cryo element, they will instead take a hit that deals damage equal to 200% of Rosaria’s attack. It only occurs once every ten seconds, but you can definitely maximise your damage output by dishing out Cyro-based attacks prior to the effect triggering.

Another great option is the Skyward Spine. This spear recharges energy up to 20% quicker, so she can use her elemental skill more often to boost her critical rate. Its secondary effect is now slouch either, increasing the critical rate by a minimum of 8% and a maximum of 16%. It also creates an AoE effect whenever she uses a charged attack. Given that she’ll be using her charged attack often, this is only ever a boon to her arsenal.

Looking for codes: Check out our Genshin Impact codes guide

If you don’t get the recommended Dragonspine Spear, there are more budget friendly alternatives, such as the Halberd. This buffs her attack power and also has a passive that deals an additional 160%-320% normal attack damage every ten seconds. You could also go with the Crescent Pike for more physical damage as every elemental orb or particle that she picks up will enhance normal and charged attack damage by 20% each for five seconds. For riskier builds, you can use the Staff of Homa for the attack boosts, but you’ll need to be under 50% health to use it to its fullest.

Since Rosaria’s skills rely on critical hits, the four-piece Berserker set is a great option. It buffs her critical hit rate by 12% and an additional 24% when below 70% health. There’s also the Gladiator’s Destiny set that increases her attack by 18% and her normal damage by 35% as she is a polearm user. You could combine the Gladiator’s Destiny set with the Martial Artist for increased normal and charged attack power, or use it as a four-piece set for a 25% buff to these attacks, whenever she uses an elemental skill, for eight seconds.

If you’d rather go the physical attacker route, then the Bloodstained Chivalry two-piece set and the Gladiator’s Destiny two-piece set combined make for a decent alternative. 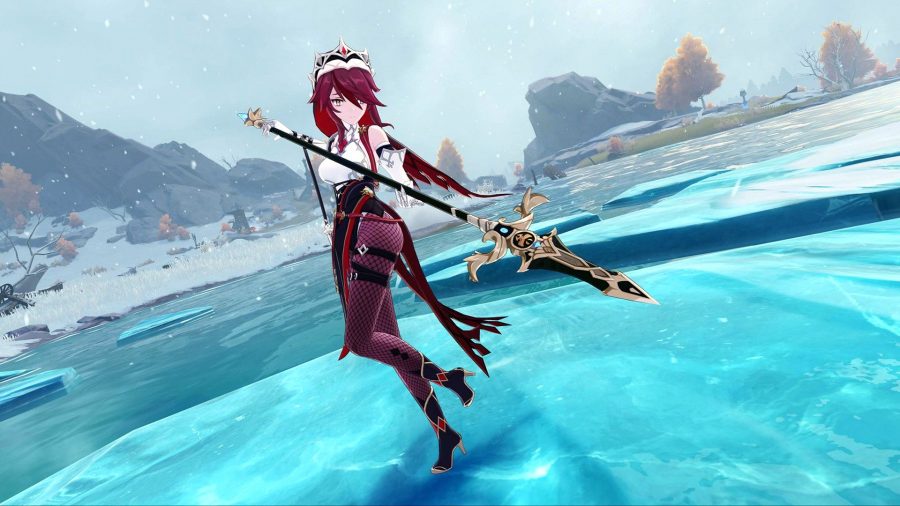 Normal Attack: Attacks up to five times with polearm.
Charged Attack: Charge up to lunge forward, dealing damage to any enemies in the way. Consumes stamina.
Plunging Attack: Rosaria dives onto the ground, causing area-of-effect damage upon impact. Enemies in her path will also take damage.

Shifts position to behind a targeted opponent, then stabs and slashes with her polearm, dealing Cryo damage. Only works on enemies the same size or smaller than Rosaria.

Rosaria swings her polearm to slash surrounding opponents, then summons an ice lance to strike the ground. Both attacks deal Cryo damage. While the ice lance is active, it periodically emits a blast of cold air to deal Cryo damage to nearby enemies.

As for other Genshin Impact stuff, we’ve got plenty on hand, including a weapons guide will help you kit out your new teammate. If you’re looking for builds for the best Genshin Impact characters, we’ve got you covered – from Ganyu to Diluc, and many more. We also have a Genshin Impact Battlefront Misty Dungeon guide for anyone looking to complete this event while it’s still live.