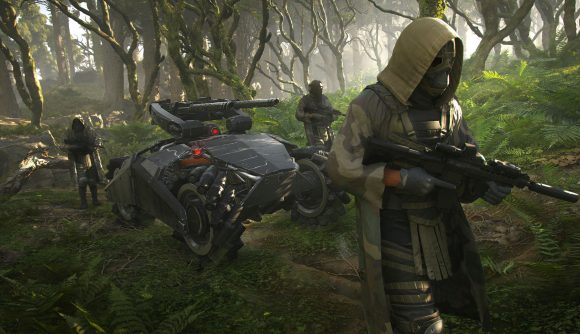 Following disappointing critical and player reactions to Ghost Recon Breakpoint last year, Ubisoft pledged to rework aspects of the game to create a “more radical and immersive version of Ghost Recon Breakpoint” that takes into account feedback it collected in a player survey. Breakpoint will be taking a tentative step toward that goal with a title update scheduled to hit this week, with another major update coming in February.

Title Update 1.1.0 for Ghost Recon Breakpoint arrives January 28, and it addresses a number of irritating bugs and exploits that have been plaguing the game since launch, and a few that were introduced in various patches. If, for example, you’ve lost your thermal/night vision, your canteen, or binoculars, you’ll be getting those back when you load a post-update save.

Ubisoft has also made improvements to enemy AI. NPCs will eventually stop taking up positions in places where enough of them have already been killed, and the rules for ‘vanish’ have been changed so that enemies will keep fighting if they’re close enough to the player.

Players should also find that night vision has been improved, and that a sharpshooter exploit with the designated marksman rifle has been fixed across game modes. Ubisoft has also rebalanced a buff to stamina that was added in the previous title update. Finally, the digital scope accessory will have multiple zoom levels once the patch is applied.

This month, players can also look forward to the Terminator live event, which will give players a chance to earn Terminator-themed special rewards by completing special missions – which will probably be somewhat similar to the Predator missions that showed up in Ghost Recon Wildlands.

The notes on the update, which Ubisoft shared on the game’s subreddit, also provide a rough roadmap for the next few months, and the new ‘immersive experience’ promised late last year is scheduled to arrive in February. Ubisoft hasn’t yet detailed the changes coming with that update, but they’re likely to be big ones that constitute an overhaul of Breakpoint’s loot and survival systems.