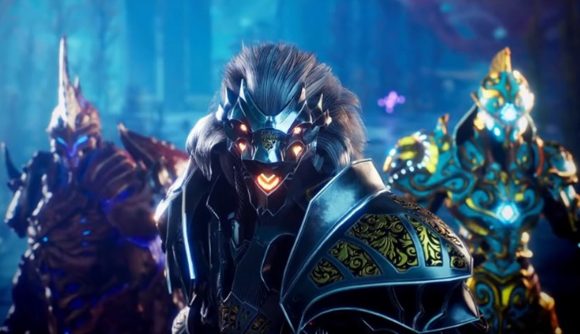 Godfall, the dark fantasy RPG game from from developer Counterplay Games, isn’t a live-service game, but it will require an internet connection. Information gleamed from the PlayStation store, and confirmed on social media, means you’ll need your broadband on to play the upcoming game.

The thread starts in replies to the official Twitter account, where someone shared a screenshot from the PlayStation store that states “online play required”, in response to a query if Godfall would be live service. The official account then replied: “Godfall is not a service game, but does require an internet connection to play”.

This caused some consternation among followers, who decried the looter-slasher for restricting players who want to play without the co-op elements. One person makes a comparison to Demon’s Souls, which, like all games in the Souls series, has multiplayer aspects for online, but can be played completely offline in single-player. Several have pointed out that always-on connection creates issues for preservation and long-term play, since once servers are shut down, the game becomes inaccessible. Given this is published by Gearbox, the company behind the Borderlands series, hopes would be high for Godfall’s playership, and high hopes leave a lot of space for disappointment.

Untangling always-on connectivity from a game like this could be a complicated job, especially this close to the Godfall release date. If the backlash here causes any changes, we’ll have to wait and see.

Godfall is not a service game, but does require an internet connection to play.

We’ve a guide to all of Godfall’s weapon classes if you’re thinking of playing, and you can find it on Epic Games Store here.