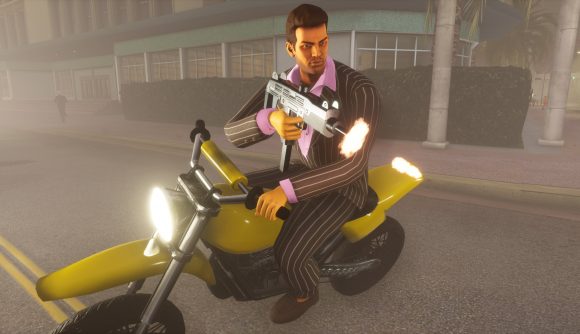 Grand Theft Auto: The Trilogy – The Definitive Edition is finally here, bringing with it the newly remastered crime-filled playgrounds of Liberty City, Vice City, and the state of San Andreas. Despite the new versions of these classic games having higher system requirements than Rockstar’s more recent Red Dead Redemption 2, anyone with an Nvidia graphics card can use Nvidia DLSS quickly and easily boost fps.

The proprietary upscaling technique has provided substantial frame rate improvements with minimal loss to picture quality in many major titles, thanks to its use of artificial intelligence. In a press release today, Nvidia claims anyone running riot in any of the three GTA titles with an RTX GPU can enjoy up to an 85% increase in performance.

While the games don’t feature ray tracing, Rockstar has implemented a “completely rebuilt lighting system” as well as higher resolution textures, improved effects, and larger draw distances. Changes have also been made to their control schemes, mirroring more closely to Grand Theft Auto V as well as other quality of life improvements.

There’s no mention of AMD FSR support in GTA: The Trilogy, which would help everyone from those with the best graphics cards to gamers with entry-level components to enjoy a performance. In the meantime, you can mod the upscaling technique into GTA V and make the game even shinier with an additional ray tracing mod.

As hotly anticipated as these remasters are, we don’t expect them to have any long-term effect on the popularity of GTA V and its ever-popular multiplayer mode GTA Online, which continues to print money for developer Rockstar. The most recent update to the mode brings triple rewards on Deluxo races.