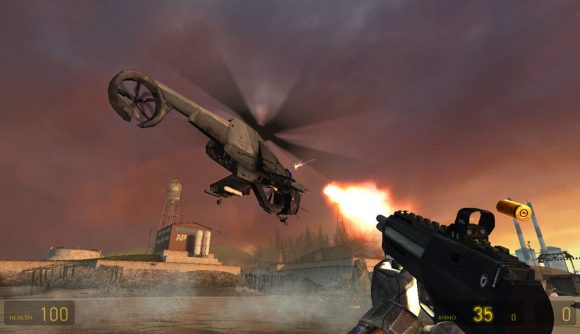 Gordon Freeman, silent protagonist of the Half-Life series, is an  accomplished man, a theoretical physicist working with the best in his field in the Black Mesa Research Facility at the start of the first game. By the end of Half-Life 2, he’s added mass-murdering anti-fascist vigilante to his long, strange resume.

In the interest of science, Reddit user TK-576 decided to count the bodies Freeman leaves behind in Valve’s FPS game series. The results are that, well, Freeman’s got quite a bit of blood on his hands. In the first Half-Life, he performs 526 kills, but in the second, it’s up to 751, a cold 637 being Combine scum. Another 199 are in the Half-Life 2 episodes, bringing the total up to 950 for that entire saga. Fan remakes Black Mesa and Black Mesa: Xen were included, scoring 399 and 178, respectively.

One remarkable tidbit is that Freeman kills almost the same amount of people in Half-Life and the Black Mesa games, an incidental testament to their accuracy. A couple of factors made obtaining precise numbers difficult, namely ammo reserves and infinite enemy respawns. Where the option for running away exists, the crew took it, which they believe is in the spirit of the games themselves. “This likely aligns with how the developers intended to depict Freeman anyway: as an ammo-starved survivalist, rather than Rambo,” the post reads. “In general, anytime we encountered enemies we could either avoid without taking damage or allow allies like Alyx or Grigori to murder for us, we took the opportunity.”

The intention is to add to this as new instalments come out, specifically Project Borealis, the fanmade Half-Life 2: Episode 3, and the ever-upcoming Half-Life 3. The kill count is only Freeman, though, so no spinoffs like Half-Life: Alyx that center another protagonist.

Here’s all Gordon’s kills in Half-Life 2:

This is the latest in an ongoing series about gaming murderers by TK-576, who’s also calculated Sam Fisher and Max Payne‘s kills. More Half-Life projects are on the way, like this remake of Half-Life 2’s opening in Half-Life: Alyx.