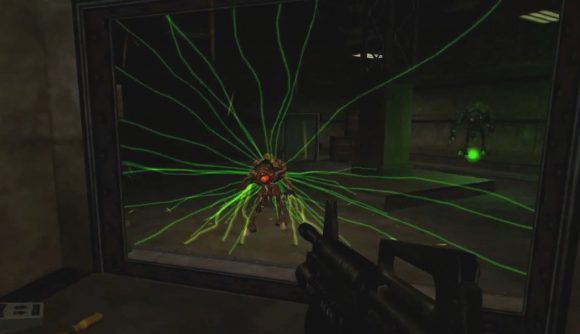 The mod converts id Software’s Union Aerospace Corporation’s waste facilities into the cleaner, greyer corridors, offices, and parking lots of the Black Mesa Research Facility. In the demo, you play-through a melding of Half-Life’s opening chapter with Doom‘s E1M1, wherein some scientists open an inter-dimensional portal for horrific creatures to break through and, when you really get down to it, there’s not a huge amount of difference in context between the two old games, is there?

A cool thing about Half-Life: Crowbar is that you aren’t Gordon Freeman, or Doomguy, you’re engineer Dr. Stan Blazkowicz, an homage to Wolfenstein protagonist BJ Blazkowicz, who adorns the Doom suit where Freeman got his HEV outfit. You’re not the one who pulls the lever like in Half-Life either, rather just someone stuck in the middle of a very unfortunate situation, having to crowbar and shoot your way through a large number of headcrabs.

“Half-Life: Crowbar-Deep in the Dead is a complete re-imagining of the first episode of DOOM (1993), taking all of the original levels from Knee-Deep in the Dead and remaking them in the style of Half-Life and it’s many expansions,” reads the ModDB description. “Will you live through this alien hellscape long enough to see tomorrow, or will you be just another body strewn about in the ruins of Black Mesa?”

What’s available now is a short demo, and unfortunately the creator, Mr_Floyd, has declared an indefinite hiatus due to other projects and mods. Hopefully one day he returns, but there’s plenty of other mods to check out in the meantime too, like this remake of Half-Life 2’s opening in Half-Life: Alyx, or this Doom 2 total conversion that’s inspired by Warhammer 40,000. If you’ve a modern machine and would like to revisit these classics, we’ve a guide to doing just that, and as always, mod with caution.