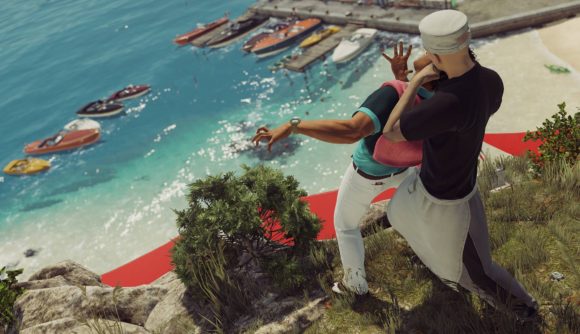 Hitman 3 is the capstone of Agent 47’s latest three-part adventure, but that doesn’t mean he’s ready to hang up the classic suit. Developer IO Interactive says it’s currently working on post-launch DLC for the consummate stealth game, but this time around it’ll look a bit different.

In an interview with The Gamer, Hitman executive producer Forest Swartout Large discussed the company’s plans for both Hitman and its upcoming and unnamed James Bond game, called Project 007 for the time being. Hitman 3 still has the usual post-launch “housekeeping” to take care of – patching bugs, correcting misprinted Arabic text, etc. – but the team is also working on additional content. Large says the Hitman team is still hashing out the specifics of what it’ll look like, but rather than building new maps, it sounds as though DLC for Hitman 3 will involve returns to classic maps from earlier in the series.

“We’re more looking at using existing locations and reimagining them, twisting them,” Large said. “And this time around, we can use the whole trilogy. We can look back at Hitman 2016 maps, Hitman 2 maps – we have all the locations.”

Indeed they do, and so do many of their players – at least, now that some confusion about carrying over progress from Steam to the Epic Games Store has been ironed out. All told, Hitman 3 includes 21 total destinations now (if you include the training levels and previous DLC locales) if you own the full set, and those early destinations have all been spruced up as they’ve been brought forward into each subsequent Hitman game.

While it may be disappointing to long-time players that Hitman 3 probably won’t be getting another standalone DLC location like the New York bank or Haven Island, there’s plenty of gorgeous real estate to revisit for Escalations, elusive targets, and whatever else IO Interactive dreams up for our bald, barcoded pal.