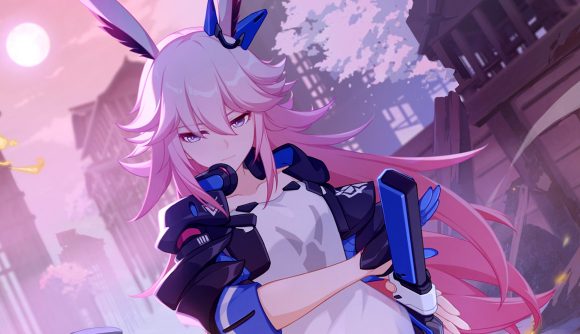 MiHoYo’s anime RPG Genshin Impact continues to skyrocket in terms of popularity, so fans have wondered why the studio’s previous game – the similar anime action title Honkai Impact 3rd – hasn’t been made widely available to English-speaking territories. That’s apparently about to change as a Honkai Impact 3rd Steam release is coming this month.

Honkai Impact 3rd was originally released in 2016, four years before Genshin Impact, and while it’s not a direct sequel there are many elements in common between the two – such as the distinct anime look, social interaction, similar character design, and some similar plot threads.

However, while it’s generally available through the game’s website in English this month’s Steam release will be the first time Honkai Impact 3rd has been made available through a proper mainstream gaming client. Even more interesting is that it’s hitting Steam before Genshin Impact has – MiHoYo’s more popular title is currently exclusive to the Epic Games Store, although with Honkai Impact 3rd hitting Valve’s platform it’s entirely possible that will change soon.

It’s actually been long-rumoured that Honkai Impact 3rd would come to Steam for a long time, with those rumours hotting up last month with the leak of an in-game medal marked as coming via a global Steam release.

Despite the popularity of Genshin Impact, it seems MiHoYo isn’t forgetting the Honkai world that came before it – not only with the first proper Steam release of any of the studio’s games with Honkai Impact 3rd this month, but also with the announcement earlier this month of a new game in the series – Honkai: Star Rail, a turn-based space RPG.

Things aren’t slowing down on the Genshin Impact front either, with the release this week of the 2.2 update that added a new character, Thoma. Hopefully Genshin Impact will join Honkai Impact 3rd on Steam in due course.