Want to unlock all endings for the Thoma hangout event? The 1.4 update introduced Genshin Impact hangout events, so we can hang out with our favourite four-star characters, who we otherwise don’t get to spend much time with.

The Genshin Impact 2.2 update introduced a new Sayu hangout event, as well as a chance to hang out with Thoma – a housekeeper residing at the Kamisato Estate. Although Sayu and Thoma are two of the many new Genshin Impact characters, now we’ll be able to experience story quests to get to know them, with six different possible endings and postcards to collect in Thoma’s hangout event, A Housekeeper’s Daily Chores.

To access this hangout event, you need to have completed Archon Quest Chapter II Act III: Omnipresence Over Mortals. You also need two story keys, which are obtained by completing daily commissions after reaching Adventure Rank 26. Here are all of the possible six endings for Thoma’s hangout event in Genshin Impact. 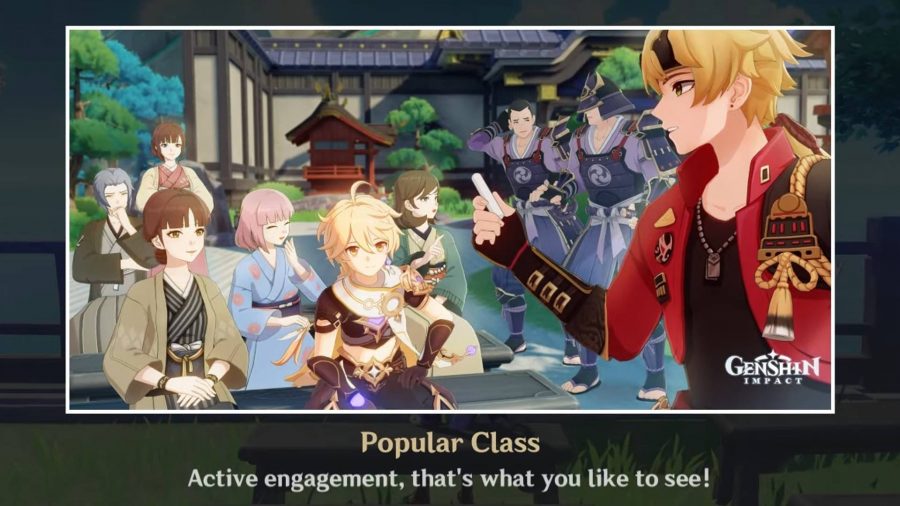 Behind His Back > Host’s Invitation > Thanks for your Hospitality! > Start Spreadin’ the News

Head to the Kamisato Estate and speak to Thoma, you need to agree with him. He’ll then ask if you prefer indoor or outdoor activities for him to host an activity, select stay indoors. Head to Komore Teahouse to continue the hangout. Thoma’s prepared a lovely feast, which you’ll quickly devour.

He’s such a good chef that you should spread the word – your next task is to gather one serving of lavender melon, fowl, and flour. Once you’ve returned the ingredients to Thoma, you need to advertise the housekeeping course to the city merchants.

Head to the marked location to speak to Ogura Mio, owner of a textiles business; this will kickstart a mission to advertise to local citizens. Once successful, return to the Yashiro Commission to make final preparations. Thoma asks you to meet up the next day – you can select any of the options here. The next day Thoma teaches the housekeeping class to local citizens. 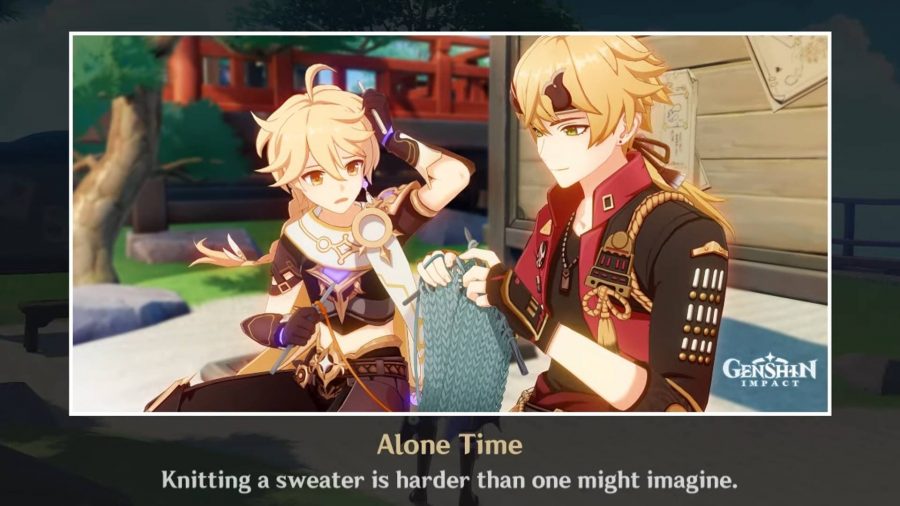 Behind His Back > Host’s Invitation > Thanks for your Hospitality! > Small-Scale Changes

Follow the same steps as Popular Class until you’re at the Komore Teahouse. Once you’ve tasted Thoma’s feast, you want to help him to promote it to the Yashiro Commission.

Instead of advertising to citizens, you need to advertise to Hirano, go and speak to him, he tells you to seek advice from Furuta. This kickstarts a limited time housekeeping challenge where you need to clear bushes and water nearby trees. Wait until the next day to complete the hangout event and earn the Alone Time postcard. 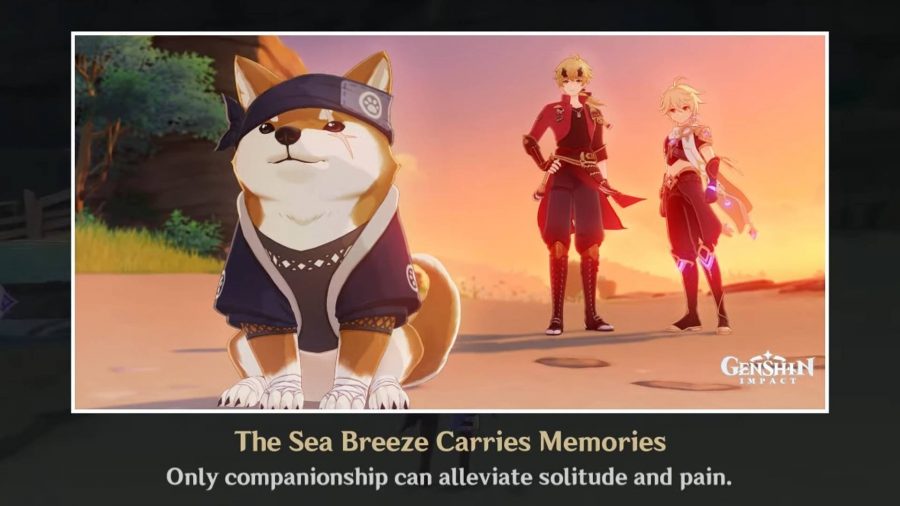 Head to the Kamisato Estate and speak to Thoma, you need to agree with him. He’ll then ask if you prefer indoor or outdoor activities for him to host an activity, select stay outdoors. When he asks what you feel like doing, select that you want to see cats and dogs, and he’ll be happy that you have similar interests. He’ll arrange a meeting spot: a sakura tree in Hanamizaka in Inazuma City where you can go and hangout with cats and dogs. Head to this spot marked on the map to kickstart the quest Under the Same Shade.

When you meet Thoma he tells you about the spot, and how he loves to visit it to spend time with the animals. He’ll then hand you a fresh fish for you to feed the cat, and fresh meat to feed the dog. Speak with Thoma again and he’ll tell you about a ninja dog he saw on a beach north of Konda Village. He expresses concern about the dog being alone – suggest going to check on the ninja dog to make sure it’s safe.

Head to the marked location near Konda Village where you’ll see the little pup chilling by the water. It’s not interested in the food you brought along to feed it, and Thoma comments that it looks on edge. That’s when you notice a group of hilichurls nearby, defeat them and rescue the ninja dog. Although it doesn’t want to go with you just yet, head back to the Kamisato Estate to ask about the ninja dog’s owner. You found out that the dog is called Inu Shoushou and he’s waiting for his owner on the beach. Head back to the beach and interact with the ninja dog, Thoma shows him a kunai, and he’ll let you accompany him back to the Kamisato Estate. 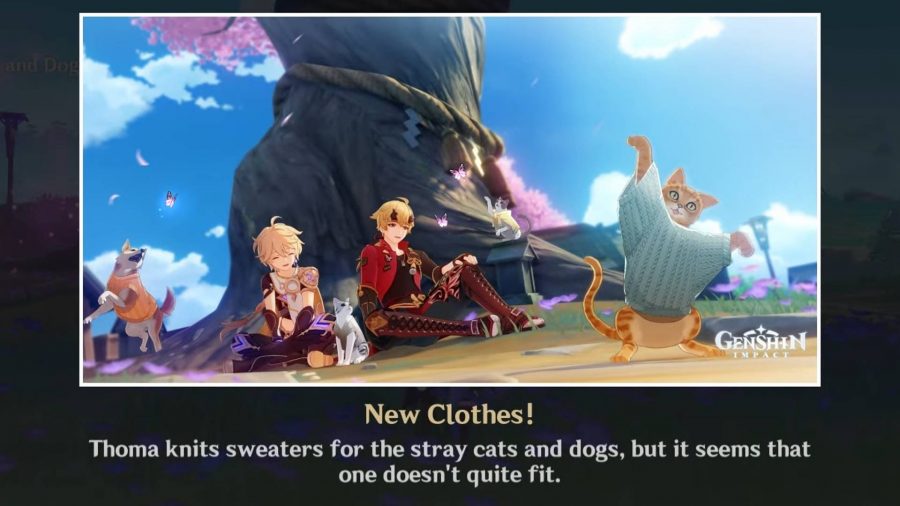 Start from the sakura tree, but instead when asked about the ninja dog, suggest giving it time to calm down. Thoma agrees to give the ninja dog some space and photograph the animals at the sakura tree instead. For Bits and Bobs for Cats and Dogs, you need to take two photographs of the stray cats and dogs from different angles. Wait until the following day and meet Thoma at the same spot, where he’ll bring some sweaters to dress up the cats and dogs (all of which he’s named). 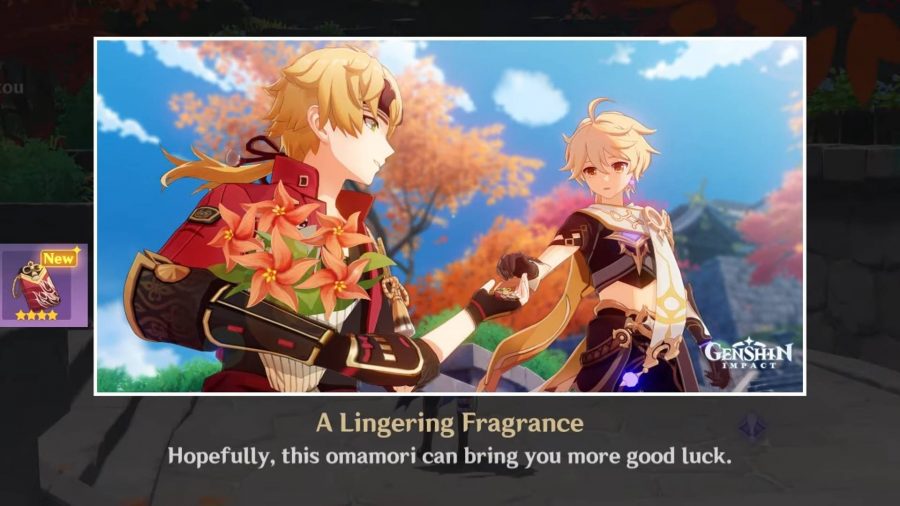 After choosing to agree with Thoma, and opt for an outdoor activity, Thoma wants to give you the grand tour of Ritou if you select hit the town. Head to Ritou to meet up with Thoma and he’ll lead you on a tour of the town, telling you all about Ritou as you go around to different merchants. At the end give Thoma a gift and he’ll give you a Lucky Omamori. 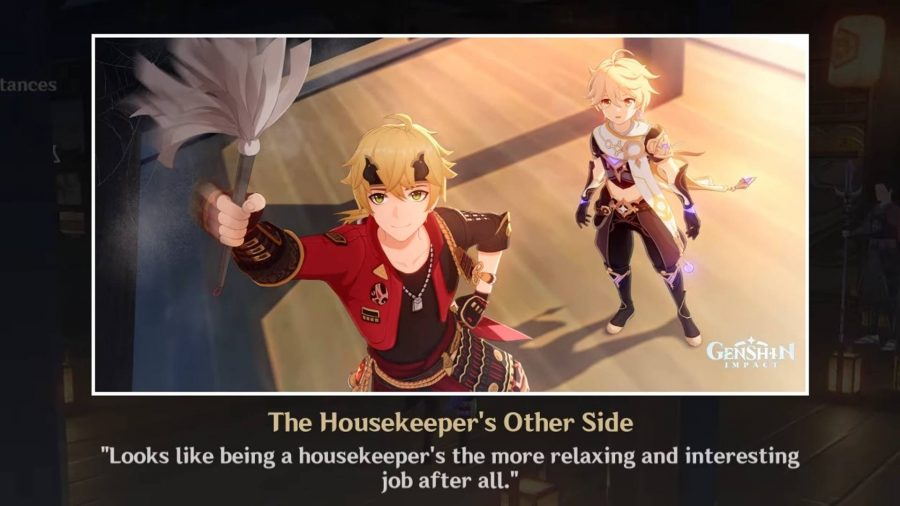 The Housekeeper’s Other Side

Behind His Back > Unforeseen Circumstances

This time, select that you don’t agree with Thoma. It doesn’t matter which option you select next to kickstart a quest to talk to Kiyoe, a member of the Yashiro Commission. Head back to Thoma to tell him about the Yashiro Commission emergency. Head to Inazuma to negotiate with the merchants; you’ll then accompany Thoma to meet ‘a friend’ which starts the quest of going to Konda Village to help with a delivery.

Help the ore merchant, Hironori, out of a jam by defeating a group of hilichurls, then safely escort the cargo balloon to its destination. You need to defeat groups of enemies along the way to protect it. Report back to Yasutake and then go with Thoma to see Sakai – this leads to the denouncement of the Yashiro Commission emergency.

Those are all of the six endings for the Thoma hangout event. If you haven’t completed the other hangout events, we’ve got guides for Chongyun, Diona, Barbara, Bennett, and Noelle. Thoma is also set to appear on the next Genshin Impact banner.