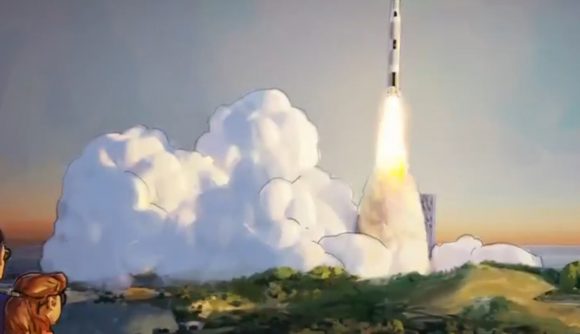 In Humankind, Amplitude’s forthcoming 4X game that seems ready to take on the hoary Civilization franchise, you won’t be stuck to playing a single culture throughout any game – or, you will, except that culture will take on new characteristics as eras progress. Amplitude today has revealed that one of your cultural choices in the game’s Contemporary Era will be Americans, and they’ll have their own emblematic unit and district to consider when you hit that timeframe.

In the Contemporary era, Americans represent the ‘expansionist’ mindset among Humankind cultures. That’s led to quite a bit of (sometimes heated) discussion on the Humankind subreddit, with several fans saying they had expected the US to be a merchant or militaristic society rather than an expansionist one.

There are certainly arguments to be made for America slotting into just about any of Humankind’s announced cultural affinities, but given the global dynamics of the Cold War that typified much of the 20th century’s geopolitical history, ‘expansionist’ is probably at least as correct as any of the other possibilities. That said, the Americans’ emblematic unit is the F-35 Lightning combat aircraft, and the emblematic district is the Defense Agency.

Here’s the announcement, which shows the launch of a Saturn V:

And finally, the first reveal of #HumankindGame's Contemporary Era!

Will you play as the Americans in the Contemporary Era? 🤔 pic.twitter.com/f4oA3BtG4v

We got some hands-on time with Humankind gameplay last year, so we’re pretty excited about the Humankind release date coming up late this summer. It’s got an interesting approach to war that lends the business a complexity lacking in Civilization, and the developer’s openness to modding means Humankind will likely have a long and interesting life when it arrives.