Social tensions are escalating in the town of Rattay. The largest city in Kingdom Come: Deliverance is stretching to breaking point. It has become a safe haven for a flood of refugees from the recently ravaged town of Skalitz, a hilltop beacon promising stability and security. Rattay’s denizens are united in their reluctant acceptance of this, but it has not prevented the poor souls from being pushed to the very edges of the city’s ample fortifications. The desperate have made their pitiful makeshift nests in whatever ditch or hidey-hole to which they can cling, an eyesore best kept out of the way.

This upsetting sight comes early in my shift as a town guard. My temporary partner-in-preventing-crime, a man they call Nightingale, introduces me to this prosperous settlement. He takes me to the squalid surroundings of these erstwhile Skalitzers after being forced to deal with one of their number transgressing their open-air quarters to plead for food. She will not be the only errant beggar to get their marching orders today.

Here is why the saving system in Kingdom Come: Deliverance is good, actually.

This scene should have been immersive. The circumstances my character Henry is witnessing at Rattay’s gates uncomfortably reflect aspects of our world today. The only problem is, when I first approached, beggars on bended knee were not just missing their homes, but their heads. I do not mean that figuratively, either: there heads had actually disappeared and not because they had rubbed the executioner up the wrong way.

With Nightingale’s narration of the city’s history and my eager codex popping up to more widely explain how people lived in this time, my involvement in this world should have been absolute, but it is difficult to stay immersed in the illusion when such glaring technical issues rear their, um, head. I can unhappily report that this was indicative of my entire experience with Kingdom Come: Deliverance.

I can’t believe it’s not Bohemia

As detailed as the astonishing worlds of Skyrim and The Northern Kingdoms of The Witcher series are, I cannot escape feeling like a guest there. Those games acquaint me with new cultures and let me explore new worlds but the presence of dragons and magic mean they are firmly fantastical. I love that, but there is something about the verisimilitude of Warhorse Studios’s Bohemia that makes me feel that I am there – even if there are some historical inaccuracies.

That realism extends to Kingdom Come: Deliverance’s gameplay and AI. It is why, if you were to put videogames on a spectrum, with fun and realism on either side, this medieval RPG would be among hard-nosed games like Operation Flashpoint. But that realism can help to get you a feel for your surroundings, too. Blood stains on your clothes can intimidate some but ingratiate you with others. Your speech level is improved for a limited time when drinking alcohol, until it dissipates to lower-than-normal levels. If you attack an innocent, guards only retaliate after bystanders run up to them and report it. These neat touches are the glue that holds Warhorse’s historical account together.

Arguably, cohesive world building is the greatest challenge for any fantasy or sci-fi writer. So why create your own religions, customs, and value systems when you can simply use what the good lord made himself? Please forgive my facetiousness: considerable thought and industry has clearly been devoted to this facsimile of Bohemia in 1403. Rather than shining cobbles we have mud, puddles, and shit. Instead of shining ivory towers and gargantuan beasts there are craven bandits, warts and all. I find myself captivated by the quotidian and Warhorse Studios are perfectly happy to provide. After dealing with the beggar at the gates of Rattay as amicably as possible, it is time for me to move on. Fully embracing the lull in my peacekeeping to embrace the chance to be a tourist, I slow to a walking pace in order to learn more – in a not too dissimilar way to Assassin’s Creed Origins’s Discovery Tour mode. The pleasure I am feeling easily dwarfs how I felt studying A-Level History, which involved making endless notes and trying to commit dates and facts from the same dull book to my brain. At times, it felt as if I had to plug my fingers in my ears to stop them tumbling out again. Kingdom Come: Deliverance, however, is making history come alive.

I encounter a familiar problem when walking down the main road: some of Rattay’s residents have evidently got so angry with their new neighbours that they too have lost their heads. This break in immersion is not aided by regular texture pop-in.

Regardless, this is little more than a minor aggravation. Nightingale, evidently unperturbed by the anatomical aberrations occurring nearby, decides all this teaching has made him thirsty. Before you report us to the bailiff, I should add that our trip to the tavern is not entirely recreational: we need to admonish a guard for abandoning their post in favour of the pub. I also take the liberty of finishing his chicken leg; hypocrisy is making me hungry.

Nightingale and I then decide to play a game of Farkle while still paying our duties the appropriate attention – honest. Farkle is a game that, naturally, exists in real life, although its folk origins are unknown. Each player throws some dice and scores points based on the numbers they roll. They can either bank those points or risk them on another throw. The first to 2000 points wins. The game is enchanting me and not only because I made that winning gamble.

When it is over I am left staring quizzically at my motionless fellow guardsman. After a period of waiting, it finally clicks: the next part of the mission has failed to trigger. In reloading my save I am out of the game again, in more ways than one.

A historical house of cards 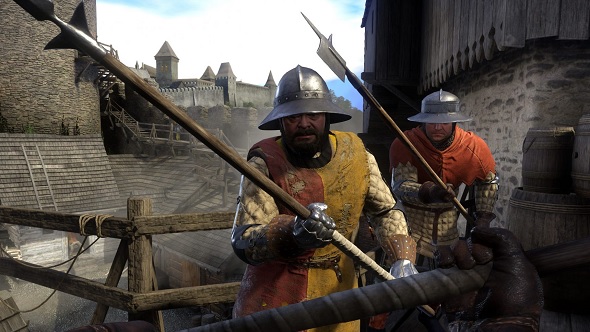 It feels churlish to highlight these bugs and glitches when considering the sheer love and passion that has gone into making Kingdom Come: Deliverance feel real. But this quest was merely a snapshot: unfortunate hiccups were prevalent throughout my time with the game, both before and after the 20GB launch patch. For each moment of educational euphoria that fused me to the year 1403 I suffered a technical hitch that unravelled that hard work. Having a conversation with a wooden door that has been shut on me mid-chat, or having to force a mission objective to trigger with some temporal rejigging (in other words, skipping time), was undoing this historical house of cards.

Kingdom Come: Deliverance is a game I want to love as much as Warhorse Studios wants to prove why this time period and authentic role-playing is interesting and worthwhile. I love learning about history and I am finding the realism of the game’s mechanics immersive and refreshing. Hopefully the forthcoming patch goes some way to ironing out some of its problems, but Kingdom Come: Deliverance is tough to recommend from a performance perspective. The ambition to recreate this slice of Bohemia is admirable but it is a shame when it is made futile.

Have you found Kingdom Come: Deliverance’s performance problems immersion breaking? Let us know in the comments below.