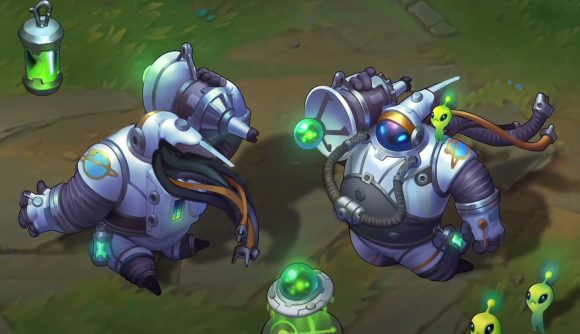 League of Legends developer Riot has shared previews of upcoming skins for some of the “underserved” but, arguably, best League of Legends Champions. The studio announced earlier this year it would be releasing a bunch of skins for Champs that haven’t received fresh new looks in a while, and now we can see what’s on the way for Bard, Taliyah, and Pantheon.

In a new clip exploring the LoL team’s plans for the year gameplay producer Jessica ‘Safelocked’ Nam talks about some new upcoming 2020 LoL Champion skins – with some teasers thrown in. First up, catcher Champ Bard is due to get a skin from the Astronauts line. Armed with a green ray gun, shiny space suit, and accompanied by some little green alien pals, the Champ looks like he’ll fit in perfectly alongside AstroNautilus and Astronaut Teemo. Take a look at around the 5:20 mark in the clip below.

Plus, ready for the summer, battlemage Champ Taliyah is in for a Pool Party skin. Ready to make a splash with Caitlyn, Miss Fortune, Lee Sin, and all the other lucky Champs that have been featured in the universe so far, Pool Party Taliyah looks amazing blazing around on a surfboard, shells and starfish flying behind her.

Pulsefire Pantheon hasn’t exactly been announced, per se, but head to around the 4:13 mark in the video and you’ll see what’s pretty clearly Pantheon sporting a very modern, futuristic take on his usual gladiatorial garb as part of an announcement of an upcoming Pulsefire event this year. Neat!

Take a look for yourself in the clip below:

Elsewhere in the clip, Nam shares updates on the state of the game, League of Legends’ ranked and Clash modes, Champions, events and other game modes, and its autobattler sister game Teamfight Tactics, too. Be sure to watch in full to see what Riot’s got planned in the coming months.

If you’re a fan of Riot’s MOBA, go get a look at the LoL patch 10.9 notes to see what’s on the way to the game next week, as well our LoL tier list if you’re keen to know what the best Champs you could be playing right now are. We also have Teamfight Tactics patch 10.9 notes for you to see, too – and there are some big updates on the way this round.