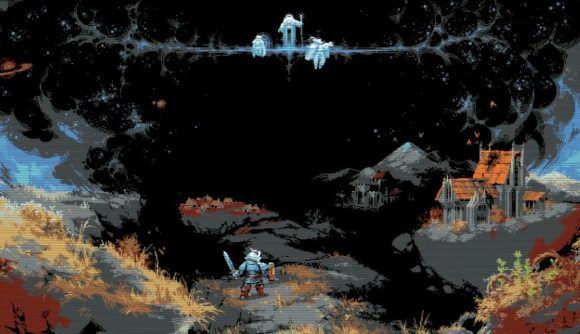 It was already clear Loop Hero was a hit on Steam, and now we know just how much of a hit. The Dungeons and Dragons-inspired RPG game, published by Devolver Digital and developed by Four Quarters, has ascended to the number two spot on this week’s Steam top sellers list.

By taking the second spot, below the unflappable Valheim, this means the top two games in terms of cumulative revenue for the last week on Valve’s store are indie games, no small feat when you consider some other entries. Looter-shooter action-adventure game Outriders has risen, seventh to fifth, meaning the demo that’s available is clearly doing something right. Hades, the smash hit roguelike game that was one of our games of the year 2020, has returned to the list, currently sporting a 20% discount to attract new players.

Tale of Immortal, a Chinese open-world game that’s been a regular on the chart of late, has dropped from third to sixth. The devs there are celebrating selling 1.8 million copies in a month by doubling down on an English translation. More DnD action, Baldur’s Gate 3 moves up a step too, from ninth to eighth, and a free weekend has given Dying Light a boon. Deep Rock Galactic and Counter-Strike: Global Offensive round out the individual games, at fourth and ninth, respectively.

Our Ian Boudreau had a good time reviewing Loop Hero, writing: “Even what I thought would be my main complaint – that there’s not enough of Loop Hero to discover – doesn’t hold up all that well when I consider that even after 20 hours, I’m still discovering fresh tile interactions that I can experiment with on future runs.”

Valheim has sold five million copies as of this week, meaning you shouldn’t expect that to be moving any time soon. Players have been getting up to some wild projects in the building game, like Stormwind Harbor from World of Warcraft. Here’s a Valheim progression guide to get you going, if you haven’t started already.