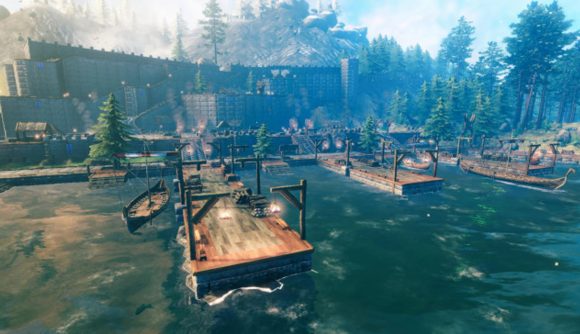 Players in Valheim have been hard at work building all sorts of cool structures in the Viking game. One World of Warcraft fan has managed to recreate the landmark Stormwind Harbor from the MMORPG game, and the likeness is a tad remarkable.

Posting on Reddit, ericsxg put up several shots of their build in the survival game. From several angles, you can a lot of the major details, from the several wharfs, to the large harbor fortress that oversees the port, and all who visit. Stairways and ramps connect the various levels, ships lie in wait on the jetties, and a wood skeleton of the harbour lion sits over everything.

No small undertaking, ericsxg explains in comments how they achieved some of the construction. This was all done using Valheim console commands and cheats to enter debug mode, accessed by hitting F5, typing “imacheater”, then typing “debugmode”. This lets you work with infinite resources, like Minecraft‘s creative mode, to build and play around to your heart’s content. One of the central exploits is making the ships float, and ericsxg says it involved raising the ground, and using a mixture of stone and wood to stop the timber from rotting.

Check out some screenshots below – a post on WoWhead compares this fan-build to the real thing.

This joins the likes of Sauron’s tower for impressive structures being built in the survival game. Valheim recently sailed by five million copies sold – here’s guides to how to summon and defeat the Eldar boss, and the best Valheim armor, for your questing needs.