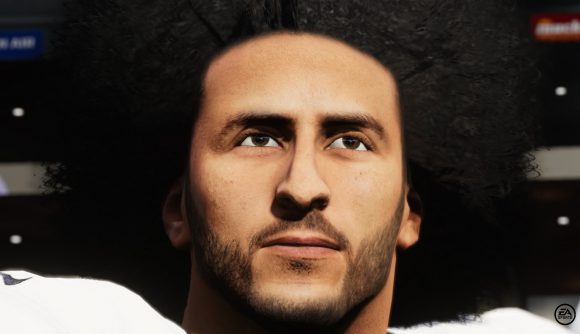 Former San Francisco 49ers quarterback Colin Kaepernick is now playable in Madden NFL 21 for the first time since 2016. EA announced his return today, noting that Kaepernick is “one of the top free agents in football and a starting-caliber quarterback.”

Starting today, EA says, players will be able to place Kaepernick in the starting quarterback position of any NFL team, and play as him in Madden NFL 21’s Play Now mode as well. “We’ve had a long relationship with Colin through Madden NFL and worked through our past soundtrack mistakes.” The reference is to Madden NFL 19, in which EA censored Kaepernick’s name from a song on its soundtrack, Big Bank by YG.

Kaepernick became a lightning rod for controversy during the 2016 NFL season when he knelt during the pre-game singing of the national anthem to protest racial injustice and police brutality in the United States. He’s been unsigned since then, working as a civil rights activist, but EA says regardless of the NFL’s position on hiring him, Madden players should have the opportunity.

“The team at EA Sports, along with millions of Madden NFL fans, want to see him back in our game”, EA says. “Knowing that our EA Sports experiences are platforms for players to create, we want to make Madden NFL a place that reflects Colin’s position and talent, rates him as a starting QB, and empowers our fans to express their hopes for the future of football. We’ve worked with Colin to make this possible, and we’re excited to bring it to all of you today.”

Madden NFL 21 has seen other changes: when the game launched, a day one patch altered the name of Washington’s football team to Washington Football Team, which had formerly used a racial slur against Native Americans. It’s also the first game in the long-running Madden series to launch on Steam on day one.