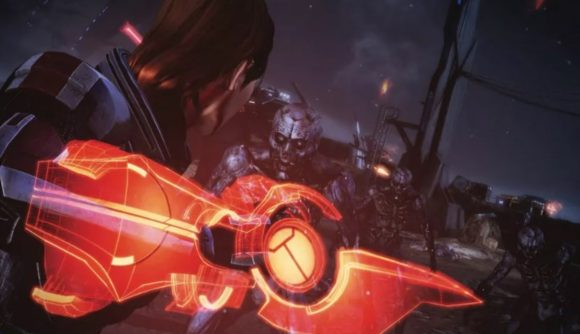 Commander Shepard is the hero of the universe in the Mass Effect series. However, when you examine just how much blood ends up on her hands during the RPG game trilogy, it’s clear trying to be even the most peaceful of saviors involves its fair share of bloodshed.

Totted up by TK-576 on Reddit, Commander Shepard’s kill-count across the Mass Effect trilogy tells a gruesome story. Mass Effect has 472, Mass Effect 2 has a worrying 837, and Mass Effect 3 contains another 472, for a combined total of 1,781. The rules for kills here are mandatory deaths by your hand as Shepard, in missions that have to be completed.

In the case of Mass Effect 2, where you have to do four character-driven side-quests for the final chapter, TK and their fellow murder-quantifiers went through all of them to figure which were the least bloody. That’s Jack, Jacob, Samara, and Thane. Mass Effect 3 is more combat-driven than its predecessors, but the sprint option means you can jet past battles, minimising harm to all involved. Going off the trailer for Mass Effect 5, the Destroy ending for Mass Effect 3 appears to be the respected canon at BioWare, so that’s what’s assumed here.

You can watch the play-throughs for counted kills below, starting with Mass Effect:

This was posted to celebrate eight years since Mass Effect 3, because time marches ever forward whether we like it or not. Previous kill-counts from TK-576 include Gordon Freeman of Half-Life, and Max Payne. The Mass Effect: Legendary Edition, containing remasters of the original trilogy (bar one DLC and Mass Effect 3’s multiplayer), arrives in May.