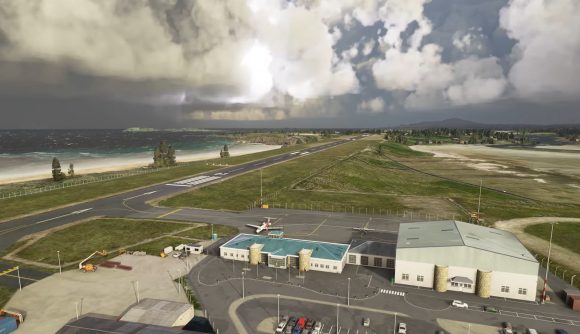 We’ve had a steady drip-feed of new information on Microsoft Flight Simulator, which is due out later this year – there’s the lavish cockpits, the impressive weather technology, the 37,000 hand-crafted airports. It’s all coming together to be what might be the most convincing recreation of actual, real-world flight ever made, and a series of comparison images helps make that case.

Redditor Utherellus has posted a gallery of images that compare locations seen in Flight Simulator to photographs of them in real life, and the effect is uncanny. In a couple cases, the only thing that marks out which image is from the game is the presence of a watermark of the player’s beta access username.

In a couple cases, including the images of New York’s Statue of Liberty, the screenshots from the game manage to look better than the real-life photographs. That screenshot is taken just before sunset, as the light angles in from the west and catches fluffy cumulus clouds drifting over New York, bathing them in a golden glow.

In fairness, the photo probably represents our weather a bit more accurately: it’s overcast and everything looks grey.

I did several comparisons between MFS2020 and Real life pictures. Enjoy. from r/MicrosoftFlightSim

Microsoft has put a lot of technological muscle into building the version of Earth we’ll see in Flight Simulator when it comes out later this year – Azure cloud processing tech, Bing satellite imagery, and photogrammetry are all combining to create a stunningly accurate model of the planet.

We don’t yet have an exact launch date for Flight Simulator, but when it comes out, you’ll be able to play it on Game Pass. Here’s what you’ll need to run it on your PC.