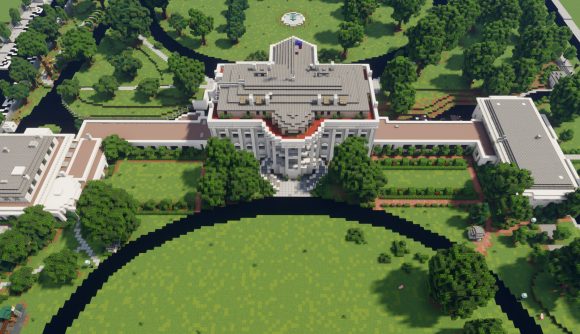 Minecraft lets you build whatever you want. You can recreate anything, whether that’s working cars, a region of a Final Fantasy XIV, or the house from Up. It’s an incredible sandbox game that offers freedom as its biggest selling point, and maybe that’s why it’s also one of the easiest ways to explore the White House now.

Thanks to the impressive building abilities of bubbaflubba2 on Reddit, you can now visit the White House. We’re not sure about you, but this isn’t something we’d ever expect to do in real life, so it’s nice being able to mosey around the staggering large building and grounds at our own leisure.

I actually went ahead and had a look around – and even managed to Google where to find the oval office. This build has been made at a 1:1 scale and actually includes every room in the building. It can feel a little clunky to move around in at times purely due to the complexity of things like hallway tables, but it’s an impressively massive space.

The outside space is just as impressive too. There are huge gardens to roam around, a basketball court, and even a little swimming pool. If you’re the kind of person that loves historical buildings like this one, then being able to take it all in is going to be great. There are some discrepancies, as things like paintings aren’t accurate. Probably. It seems unlikely that there are bunch of skull paintings in the White House, anyway.

If all of this sounds good, you’ll be happy to know that you can also enjoy exploring the White House by downloading the map here. If you’ve never downloaded a map before, then you can find all of the instructions you need here. It’s not hard to do, but finding the correct folder can be a little finicky.

I rebuilt the entire White House in Minecraft, with every single room recreated at a 1:1 scale. This project has taken countless hours of research and building, and includes 6 floors, a bowling alley, movie theater, basketball court, nuclear proof bunker, a chocolate shop, and tons of other rooms! from Minecraft

If you’re more about the future than the present or past, then you’ll be happy to know that you can mess around with goat horns in Minecraft thanks to the latest snapshot. There are also a few changes to how the allay mob and Warden work too.