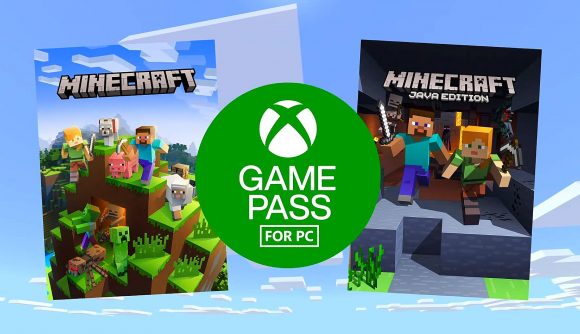 Minecraft Live 2021, Mojang’s annual celebration of all things bright and blocky, is happening right now, and while we’ve been expecting updates about updates and new mob reveals, Mojang has also unveiled that two versions of Minecraft are coming to Xbox Game Pass for PC later this year.

To be more specific, the two versions are Java Edition and Bedrock Edition, and they’ll both be available via Xbox’s Game Pass for PC service from November 2, 2021.

Now if – like us – the many different Minecraft versions scare and confuse you, then here’s roughly what each of those versions offer. Java Edition, which is normally sold via the Minecraft website for £17.95 / $26.95, is the most customisable version of the game, and is the version you’ll want if you plan on using custom Minecraft skins, Minecraft mods, and booting up custom Minecraft maps and servers. Those are basically all of the things that make Minecraft on PC one of the best sandbox games around.

However, Java Edition is also much more demanding on your hardware, which is why you might want to check out Bedrock Edition, which is the multiplatform, cross-play, and gamepad compatible version of the game. It’s also much less demanding on hardware. Bedrock Edition is normally available on the Microsoft store for £22.49 / $26.99. This edition also features access to the Minecraft Marketplace, where you can buy additional maps, skins, and various other goodies.

If you’ve never signed up for Xbox Game Pass for PC then you can get the first month for £1.00 / $1.00, which then becomes £7.99 / $9.99 monthly – you can sign up here. And in case you’re curious about how much else is on there, we ran a test a few months back and discovered that it would take 4,000 hours (at the absolute least) to beat every game on the subscription service.