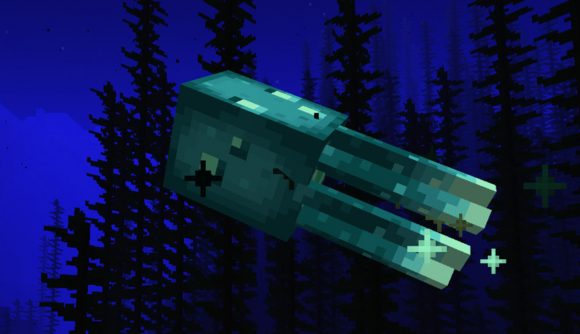 A new pre-release is out for Minecraft Java 1.17.1, and with it comes a fix for a bit of a zombie problem that’s cropped up since the introduction of glow squids in 1.17. You see, the precious glow ink sacs dropped by glow squids was proving irresistible to the building game’s zombies, and once they picked up the ink sacs, the zombies wouldn’t despawn.

As we’ve explained in our guide to Minecraft glow squid, the creatures typically appear in dark bodies of water, which usually means caves. This is also where zombies tend to be, and when glow squid died, the nearby zombies would rush to pick up the ink sacs, preventing the zombies from ever despawning. As the number of permanent zombies in your world got higher, you’d eventually start seeing some serious performance issues as Minecraft tried to keep track of dozens of the monsters all at once.

Minecraft 1.17.1 Pre-release 1 fixes this issue by making zombies, zombie villagers, husks, and drowned all completely disinterested in glow squid ink sacs. There are some other changes as well: you’ll now only be able to obtain blue axolotls through breeding (they’d been appearing in the world on their own, mistakenly), and there’s now a chance for two non-screaming goats to produce screaming offspring. Hooray!

Players are also pleased to see that this update increases the rate at which drowned drop copper ingots – it’s now 11%, plus another 2% for each level of looting you have.

You can head over to the official Minecraft site to read the full patch notes, which include a link to the updated datapack for this Caves & Cliffs preview for the Java edition. Part 2 of the Caves & Cliffs update, version 1.18, is expected this holiday season.