Want to know everything that’s coming in the Minecraft 1.18 update? The Caves and Cliffs update has been split into two halves: the first part has already been released with the Minecraft 1.17 update. This means we have plenty of new Minecraft mobs to get acquainted with such as goats, glow squid, and axolotls, as well as the brand new amethyst blocks.

However, the 1.18 update is where all the world-changing features will arrive. These include all new biomes, a fearsome new enemy mob in the form of the Minecraft Warden, and new blocks that enable wireless Redstone for the first time in Minecraft. It’s all very exciting stuff and if you can’t wait until the official release date to experience it for yourself, you should probably check out the Minecraft snapshot betas.

So without further ado, this is a roundup of everything that we currently know about the Minecraft 1.18 update, otherwise known as part 2 of the Caves & Cliffs update, as well as everything that’s appeared as of Minecraft snapshot 21w37a. We’ll also include all of the announcements that Mojang has made regarding any confirmed features coming after the 1.18 update.

The Minecraft 1.18 update will launch holiday 2021. Since Minecraft 1.17 has just been released, there is currently no updated snapshot beta beyond the official released version, though this will likely change in the near future. 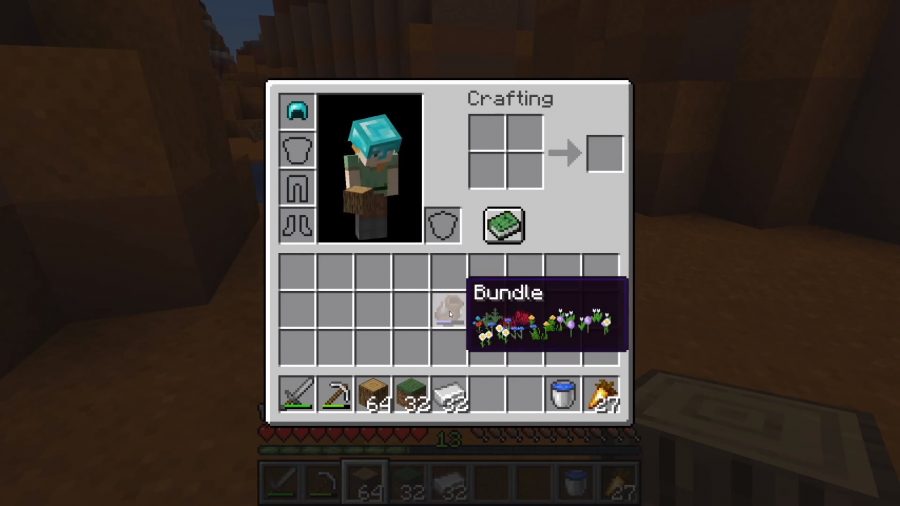 Finally, there are three awesome new features coming to Minecraft via the Caves & Cliffs update. One of these is the new bundles feature, which is designed to help with inventory management.

You’ll be able to create bags where you can place as many items inside as you can fit. Their overall capacity is unknown at this time, but it seems like it could be several full inventory slots full. Bundles can be stored in chests and you can mix-and-match. 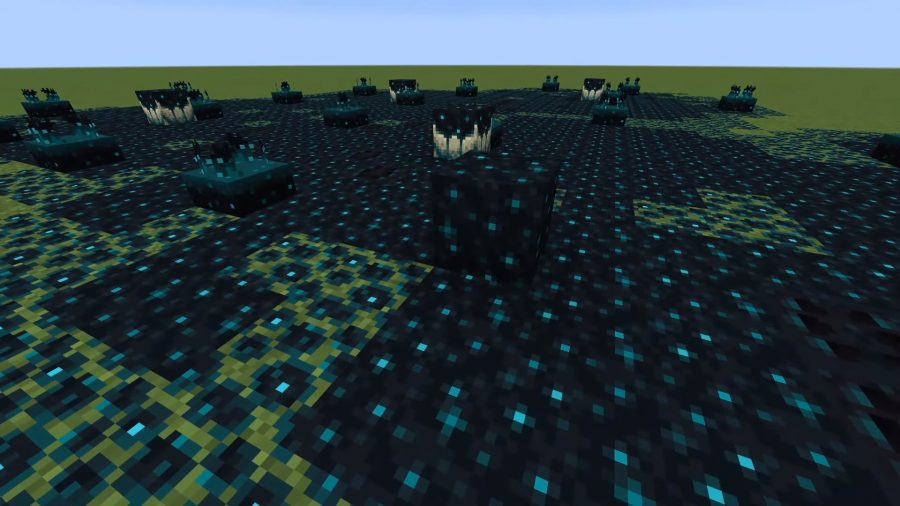 One of the Deep Dark biome’s characteristics is that it is where Sculk Growths are normally found. It’s a new redstone-like power source, but is the key for finally introducing us to the wireless activation of redstone powered gadgets.

If a Sculk Sensor detects footsteps, or destroy/place a block, it will emit a new redstone signal. These can be used to operate gadgets without a trail of redstone connecting the two.

You can use wool to prevent the signal passing through too, meaning that you can ensure that the trigger only activates the signal between Sculk signals and contraptions. The possibilities for wireless redstone in constructing city builds or colossal Minecraft castles are nigh-on endless! 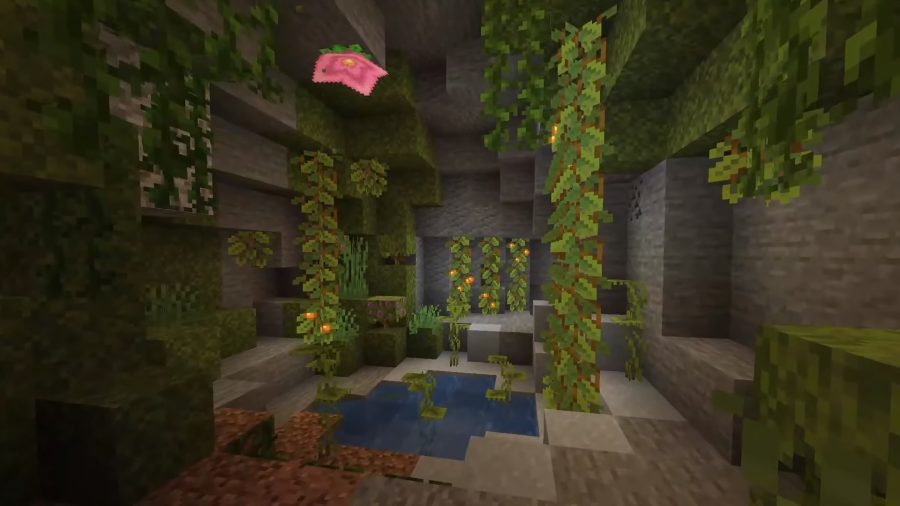 Noise caves are new types of caves that can be generated underground – they come in two varieties: cheese and spaghetti. Cheese caves have wide-open areas filled with stone pillars, and spaghetti caves are long, narrow, and winding. Caves can also contain aquifers, flooded cave systems with an abundance of ores within.

The Lush Caves biome is now discoverable in Minecraft as of the 21w37a snapshot. This cave system is filled with vines, fruit, and flowers that hang from the ceilings. They are inspired by paintings by Swedish painter John Bauer, whose work regularly depicts people walking through huge woodland areas.

To find a Lush Cave, you can try to find Azalea trees on the surface. These can indicate that there are Lush Caves below that you can mine into and explore.

The Lush Caves are covered in new flora. The aforementioned Azalea plants come in both flowering and non-flowering forms, but will turn the dirt into rooted dirt. This is important as rooted dirt has a chance to spawn hanging roots underneath them, which you can harvest.

Spore Blossoms are pink flowers on the roof and they drop particles. Mojang didn’t say if these particles do anything, but it did say that the Spore Blossoms can be moved to ceilings elsewhere. Moss also grows in the Lush Caves, and is available in block form or as tiles.

There are also vines that grow within the Lush Caves with orange berries. These are glow berries which can be picked and eaten, filling a small amount of the hunger meter. However, it’s possibly better to leave them on vines as they provide a natural light on their own. As the vines grow, there is a small chance that they will grow a glow berry on the next segment down. 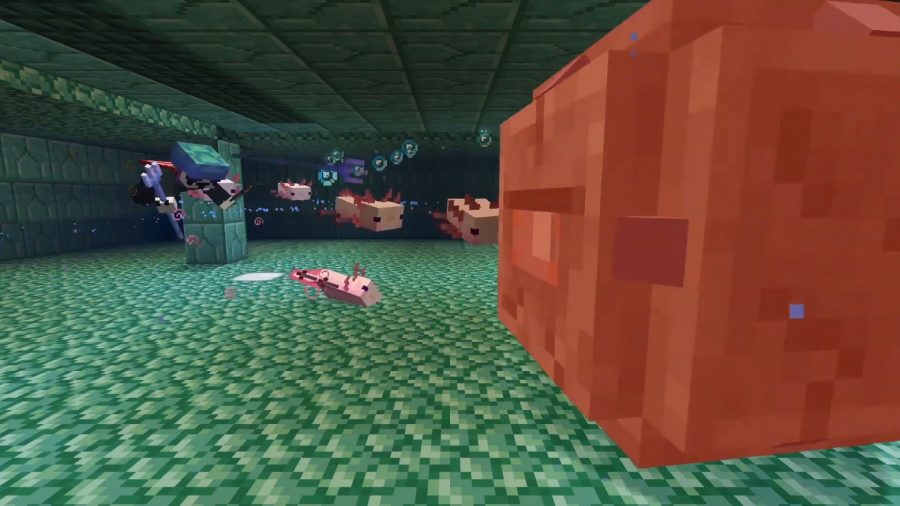 The last new plant is the Dripleaf plant. They’re found in clay pools and could be handy for those wanting to construct a jungle-themed obstacle course. Their leaves can be jumped on, but the leaf will droop the longer you stand on them. You will eventually fall through it, but thankfully this won’t cause any permanent damage to the plant as the leaves do recover fully.

You can only plant the small dripleaf plants on clay or dirt that is underwater. Once they’re fully grown (either naturally or using bone meal to speed up the process), you can harvest the big dripleaves that can be placed anywhere.

Finally, when the Lush Caves are introduced, the watery areas will be where you can find the axolotls, rather than their current location of underground rivers. 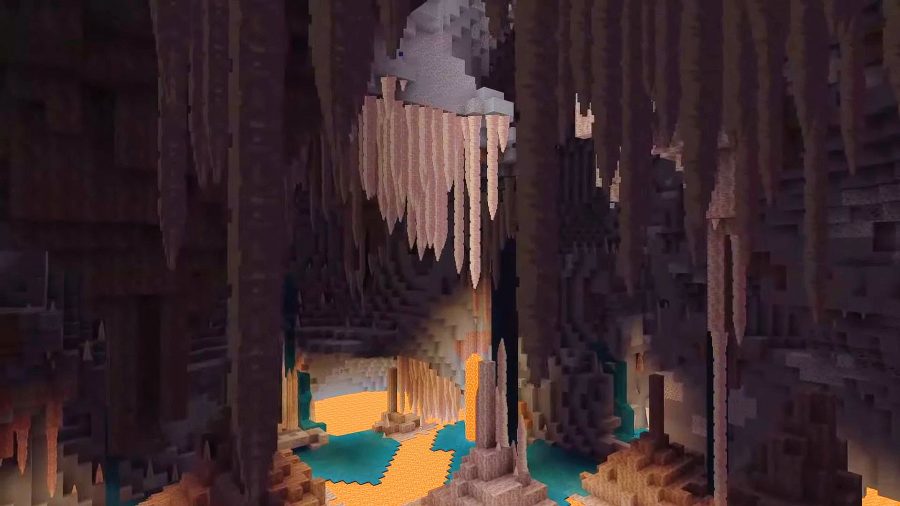 Dripstone Caves are now in Minecraft as of the 21w37a snapshot. Though the stalagmites and stalactites did make it into 1.17, they’re also what will make the Dripstone Caves stand out. Destroying the blocks at the top of the stalactites will drop the rest from above. Stalagmites, on the other hand, act like spikes and can hurt friends and foes alike. Stalactites also drip water, so you can use a bucket to collect the water. This gives you a renewable source of water.

You are able to combine multiple stalagmites and stalactites to make them as long as you can imagine. Stalactites will not only drip water, but they are also able to drip lava, which can be collected in a cauldron below, just in case you need it for later. It’s also noted that, if you were to throw a trident at a pointed dripstone, the dripstone will break. You can also find more copper ore here than in normal caves.

Throughout the Minecraft Live presentation, Mojang has hinted at a third new biome called the “Deep Dark”, along with some of the items and mobs found within, but it hasn’t talked about the biome itself in depth.

In the first Minecraft 1.18 experimental snapshot, there’s a natural terrain variation that is separate from how the biomes work. The patch notes state an example of this, suggesting that “forests and deserts could form up on a hill without needing a special biome just for that”. Mobs that spawn in the dark will now only spawn in complete darkness, so dimly lit areas are safer. However, a subsequent experimental snapshot makes zombies, spiders, and skeletons spawn at light level 11, so multiple torches are needed to ward away those monsters.

As of Minecraft snapshot 21w37a, all of the terrain changes and ore distribution updates are now included. You can get a full list of these changes over at the official site, but here are some highlights to the new new changes to mountains, rivers and caves.

It would be rather difficult to implement with the current terrain height limitations, so these are being changed to allow for the underground biomes. You may have heard Y=0, this refers to the coordinates that can be enabled in the options menu, and the Y axis shows the vertical distance. The lowest Y axis block distance limit will change to -64 in the upcoming update, giving you a large number of blocks to dig into. This is where you’ll encounter Deepslate blocks, including new varieties of Minecraft copper, iron, and gemstone blocks.

The same can be said for the maximum height, as the new highest Y axis block distance limit is 255, and this means there are new snowy biomes to explore: 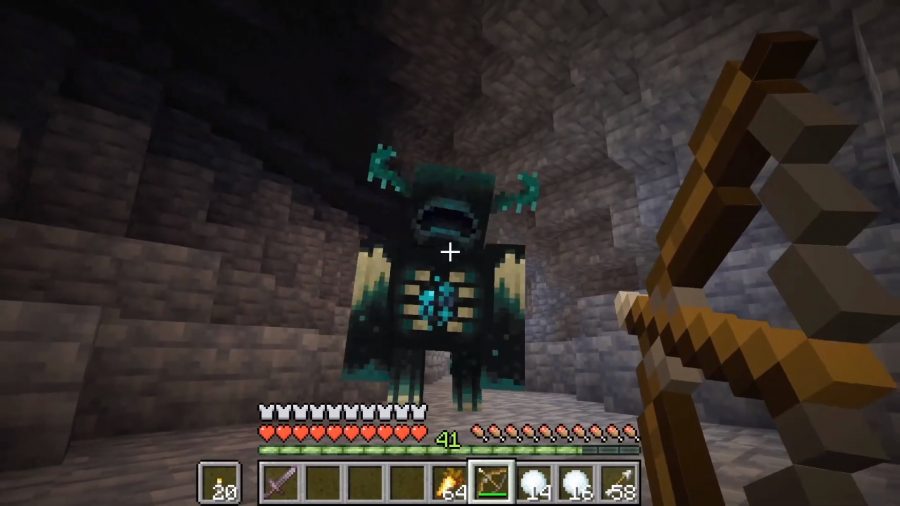 This new mob aims to take players back to their first night in Minecraft, when everything was scary. The Warden is found in the Deep Dark biome, and its only aim is to make you pee your pants. They can be found deep in the dark underground areas and are considered a hostile monster mob.

Wardens are completely blind, but they react to vibrations from footsteps and thrown objects. Snowballs can distract the warden as it detects the vibration of the snowball’s impact. They can make the screen go dark briefly when one is nearby, though Sculk Sensors – another new block type – also react to their presence.

Should you come across one, you can try to sneak around it, but you’ll need to be very careful. If it knows where you are, the light in the centre lights up when it’s chasing you, it’ll run quite quickly and can thump you for a lot of health. It’s worth noting that damage taken from the Warden ignores armour, so it’s best to go in prepared. Who knows, maybe the trident will be an effective weapon to use against it.

Sadly, this is the one announced feature that’s coming after the Minecraft 1.18 update. We say ‘sadly’ because this is probably the coolest new addition.

Around the surface, there are excavation sites that will appear. These have chests that contain brushes. You can then use the brushes within the dig sites themselves, or make them yourselves with certain materials, to brush away at certain blocks, like gravel and dirt.

Sounds great, doesn’t it? Hidden treasures are just waiting to be found. But there is a big catch. If you are careless and don’t fully uncover the artefact before moving on, you’ll risk destroying it and losing it forever. If you are careful though, you can excavate priceless artefacts or rare blocks, such as a Blue Ceramic Shard with some art on it or a block of emerald.

Ceramic shards can be used to reconstruct pots by placing them on templates over fire pits. Once you’re happy with their design, you can fire up the pit underneath them with some flint and steel to complete the pot.

And that’s everything we currently know about the Minecraft 1.18 update, and beyond. If you’re looking to enhance your Minecraft experience a little, we have plenty of guides for experimenting with the best Minecraft mods, the best looking Minecraft shaders, and some excellent Minecraft servers to play.