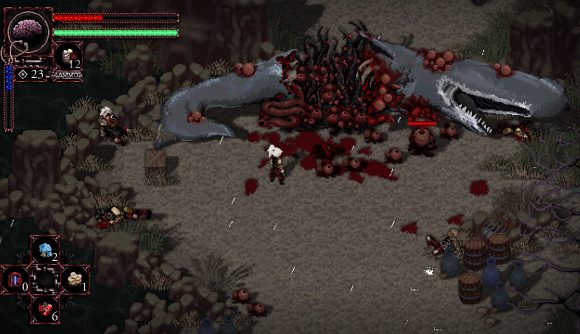 PAX West and EGX have both shifted their traditional on-location events to the internet realm this year, and while it’s a bummer for everyone who’d planned on meeting up in person at one of the festivals, the good news is there’s still plenty to celebrate in the form of free game demos on Steam. A bunch of promising-looking indie games are available to try this week, and all you’ve got to do is head to Steam and download them.

PAX Online/EGX Online runs through September 20, and there’s a full schedule of panels and events to catch via stream, which you can find right in your Steam browser. You can watch showcases and demonstrations, or go hands on with the exclusive demos.

A couple of those have piqued our interest already. There’s Morbid: The Seven Acolytes, which was revealed this summer at the Future Games Show. It’s a pixel art-style isometric action RPG that’s heavily influenced by Lovecraft, Cronenberg, steampunk, and the Souls series. It looks challenging, bloody, and strangely cute, too – at least when it isn’t mashing you into pulp with its own viscera.

Then there’s Dwarfheim, a fantasy colony builder and co-op RTS that looks like a solid, back-to-basics approach to both genres, but blends them together in a compelling way. You can try that one out now to get ready for when the Dwarfheim early access phase begins later this fall.

You also might want to check out the Gatewalkers alpha – it’s an RPG and survival game with the isometric perspective of Diablo or Path of Exile.

There’s plenty more to check out, and events around the clock. Head to the PAX Online page on Steam to find all the games and events. There are tons of other free Steam games to play too, so just remember you’re not restricted to what’s on the virtual show floor.