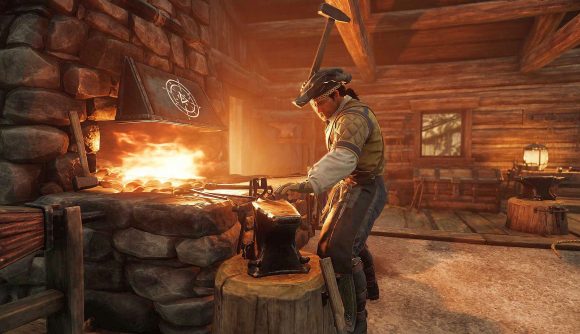 You’re probably well aware by now that New World, Amazon Games’ just-launched fantasy MMORPG, is very popular. Since its September 28 debut, it’s seen enormous player counts and some pretty hefty in-game queues as a result, with congestion-easing solutions like server transfers on the way soon. Now, the New World team has announced that it’s bringing in some more changes to help address congestion from another angle – this time by cracking down on AFKing.

New World already has a built-in AFK timer which boots players out of the game after a period of inactivity. It’s not clear how long this is set at, exactly, though sites like RPS report that it’s thought to be around 25 minutes. However, in a new forum post, community manager HardcoreHenry reveals that the team has “seen a lot of frustration around individuals who may be artificially remaining active enough in servers to avoid the automatic AFK mitigation that is built into New World”.

The community manager says that the MMO’s devs “certainly agree that this is not acceptable behaviour, especially when there are droves of individuals who are waiting patiently to get into a world”, and explains that the team has put together a new solution to “identify and action against bad faith AFK players”.

The new system will quickly kick players out to the main menu if they’re detected by it, with harsher penalties to follow if the behaviour becomes consistent. It’s not clear what these penalties might be as yet, though.

[#NWSTATUS] We are beginning to roll out specific actions against AFK Timer Subversions. Find more information in the link belowhttps://t.co/6ppAcF2qkn

The post naturally doesn’t go into any detail on how this new solution works but it does say that the New World team is confident that those playing New World as normal shouldn’t come across any issues when it’s rolled out. It’s also not clear exactly when the new solution will be live. “This effort is going to be rolled out over a period of time, so results may not appear immediate,” the post explains, “but this is something we are dedicated to bringing online as quickly as we feel comfortable.”

If you’re just getting started with the MMO, check out our New World best factions, New World servers, and New World leveling guides at those links for some handy pointers.