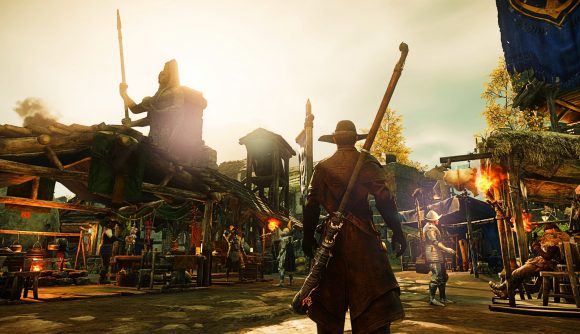 Amazon founder Jeff Bezos has praised the success of its recently released MMO New World, which is getting a lot of praise despite players having some major launch issues with the game. However, Bezos has harsh words for previous Amazon games such as Crucible – labelling them “failures and setbacks”.

Amazon Game Studios’ first MMO New World released earlier this week and has been an immediate success, breaking player count records all over the place but suffering as a result – players are still facing long queueing times, but fortunately Amazon promises to sort those out soon by adding extra servers. It’s the complete opposite to Amazon’s previous game Crucible, which was shut down for having too few players not long after launch.

Entrepreneur and Amazon chief Jeff Bezos took to Twitter to praise the team at Amazon Game Studios and New World’s release, saying “after many failures and setbacks in gaming we have a success” and “so proud of the team for the persistence.”

Bezos went on to link to two articles – one from CNBC reporting the “smash hit” of New World, and another from earlier this year by Bloomberg that suggests that Amazon can’t make “a good video game”. As Bezos notes, “the two articles are only eight months apart”.

After many failures and setbacks in gaming we have a success. So proud of the team for the persistence. View setbacks as helpful obstacles that drive learning. Whatever your goals are, don’t give up no matter how hard it gets. @playnewworld (1/2) https://t.co/LK0VUdCSS9

It’s excellent news for the New World team and Amazon as a game developer, but it must be sad for the developers of Crucible – a game that suffered from a bit of an identity problem and failed to attract players. New World also suffers from some flaws but it’s in a far healthy place right now in terms of player numbers.