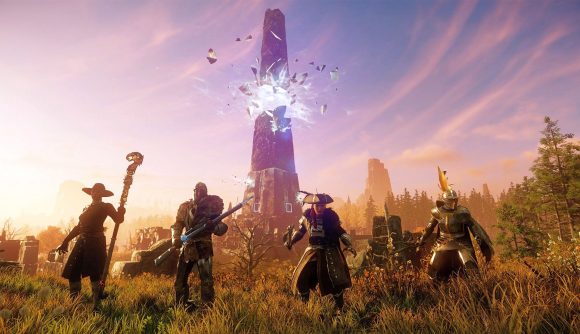 We’re just hours away from the release of Amazon Games’ MMORPG New World, so the devs are gearing up for launch by sharing details on how and where players can dive in when live time rolls around. The studio has already revealed the (pretty huge) New World server worlds list and now we’ve got the breakdown of when the New World release time will be across different regions.

Amazon Games has announced the New World release times on Twitter with a handy graphic (which we’ve included below), revealing when servers will go live in the following regions: Australia, US West, US East, Europe, and South America. We’ll run through these for you so you can be sure of when you can dive into Aeternum where you’re based, as it’s not a single time across all regions – they unlock at different points throughout the day.

As for pre-loading the MMO, the good news is New World pre-loads are already live. So, you can get it ready and waiting for when the release time arrives tomorrow right now if you’re keen to dive in as soon as you’re able.

Here’s Amazon’s helpful graphic laying this out if you prefer to check out the New World release time that way:

See how you can prepare for launch and get exclusive drops from some of your favorite content creators!

The studio has added some context on the thinking behind Australia’s time in a blog post on the upcoming PC game’s site, explaining that, “to provide the best possible experience at launch, we’ve decided to open our Australian server at a time that aligns with the larger global rollout. Following the 8am pattern for Australia would have resulted in it being a different ‘day’ than other regions due to the time difference, and we wanted the region to be able to share in the launch community elsewhere in the world, like streams and website posts”.

In the blog post linked above you can also get another rundown of all the server worlds available in each of those regions, with some noting recommended languages to help players get an idea of where they might like to head when launch day arrives.

For some handy pointers ahead of the big day, check out our New World money farm trading posts, New World best weapons, and New World beginner’s guides at those links.