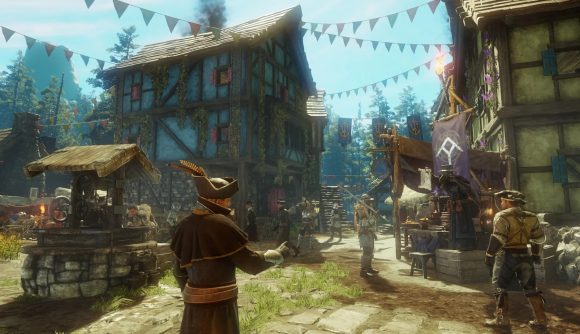 MMORPGs are a great place for players to get up to all kinds of antics and shenanigans. For example, in recent months Final Fantasy 14 has seen players running around dressed as Colonel Sanders, a giant chicken, and even Bethesda director Todd Howard. It seems New World is no exception, with senior producer Katy Kaszynski highlighting one amusing, and rather heart-warming, example that came to the devs’ attention during the MMO’s open beta.

In a talk at this year’s Develop: Brighton conference about ‘active listening’ and how New World evolved into an ‘MMO success story’, Kaszynski touches on how the open beta (which ran from September 9 to 12) revealed to the devs “all of the other new and exciting ways the players were using our game”. The test “let us see all the ways that people were using their agency”, Kaszynski explains. “One of my favourites was this group [who] created a company called the Town Criers, and the Town Criers literally got the news of the day and then went to the different zones, the different settlements, and yelled in the middle of the town what was going on.

“What wars were coming up; when invasions were happening; where there were iron nodes that people hadn’t found yet. They were just so excited to be these town criers, and it was really fun and really cool to see.”

This comes as part of a wider discussion at the talk about how the approach the studio took towards its rollout of New World’s betas and other tests by drawing on particular types of feedback and ‘active listening’ helped the devs gather valuable information about how players were taking to New World. This then gave them a lot of useful insight into what players enjoyed, what was surprising, and what needed more work before launch.

During the conference, Kaszynski also spoke about why the New World devs didn’t want it to be like every other MMORPG, which you can read about at that link.

If you’re just embarking on your adventures in the MMO, check out our New World beginners’ guide, New World PvP guide, and list of the best New World weapons for PvE and PvP at those links.