You can get 1993’s original Doom to run on just about anything these days: one enterprising player has gotten the game to work on a McDonald’s cash register, for instance. But now someone has gotten Doom running in No Man’s Sky, and it’s a place you can go right now.

YouTuber and game developer JP LeBreton has built classic Doom’s first level on a remote planet in Hello Games’ massive universe, and – thanks to the Beyond update – you can visit the planet and try the level. It’s about as close as you can get to the E1M1 ‘Hangar’ map as you can get using No Man’s Sky’s suite of construction tools, and while concessions obviously had to be made due to the fact that demons aren’t invading, it’s an impressively faithful piece of work.

LeBreton’s version of Hangar is a base constructed on an irradiated red planet that he’s claimed and named Phobos, the Martian moon where Doom opens. As shown in the video below, there’s a series of glyphs that you can use at an in-game portal to teleport there. Once you’ve arrived, hop in your ship and fly to the marker he’s set near the base.

From there, head inside and have a look around. You’ll see the opening room with its four pillars, with column-like structures in place of Doom’s exploding barrels. There aren’t any zombies or shotgun guys to take out, so you can head through the level at your own pace. 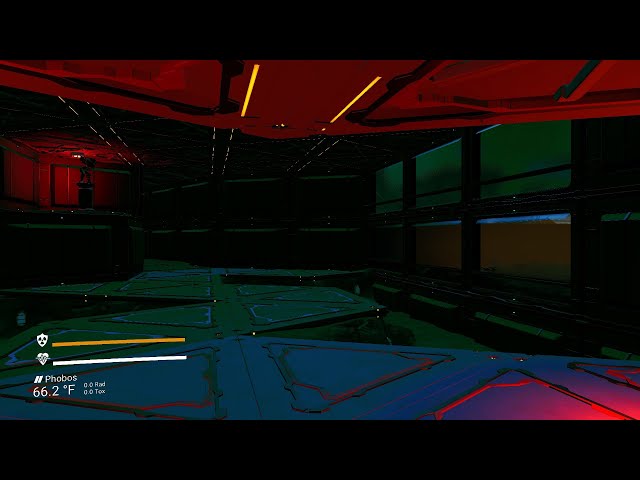 Triangle components allowed LeBreton to roughly replicate the zig-zagging bridge across the acid pool where you encounter Doom’s first imp, and he’s also rigged up button-activated doors in appropriate places. Once you’ve gotten to the end, stand on the teleporter and hit the button – it’ll take you to a small ‘victory room’ that contains a terrarium and a message from LeBreton.

After that, you can hit another button to open the door, which leads to a hewn tunnel that leads up and out from underground. You’ll emerge from underneath the landing pad outside the entrance to the base.

LeBreton has built quite a few other interesting bases for No Man’s Sky players to visit, including a real-world Taco Bell location in Pacifica, California, a tribute to Double Fine’s The Cave (which LeBreton designed), and Chihiro’s house from Studio Ghibli’s Spirited Away. You can find coordinates to all of them on his website.