Everyone’s entitled to one good scare, but we’re forfeiting that right this year – far too many ghoulish goings on in the real world to relax by being chased by an evil clown-spider train. See, we love Halloween here at PCGamesN – pumpkins, low-budget costumes, homemade snacks that are made to look like eyeballs – but we’re not all fans of horror games. Jumpscares? Needles in the eye? Spiders with upside-down baby faces? None for us, thanks. To make matters worse, there are plenty of non-horror games with terrifying moments in them, so finding totally scare-free, fright night appropriate games is no mean feat.

If you want to celebrate All Hallows’ Eve without having to sleep through November with the lights on, then we’ve prepared a list of Halloween-adjacent games that provide all the schlocky, tropey goodness of the holiday without even the slightest risk of getting spooked.

You can find our roundups of the best zombie games, vampire games, and ghost games if you’re looking for a more specific brand of Halloween critter, or – if you start to feel brave halfway through this list – you can check out our main selection of actually scary horror games. 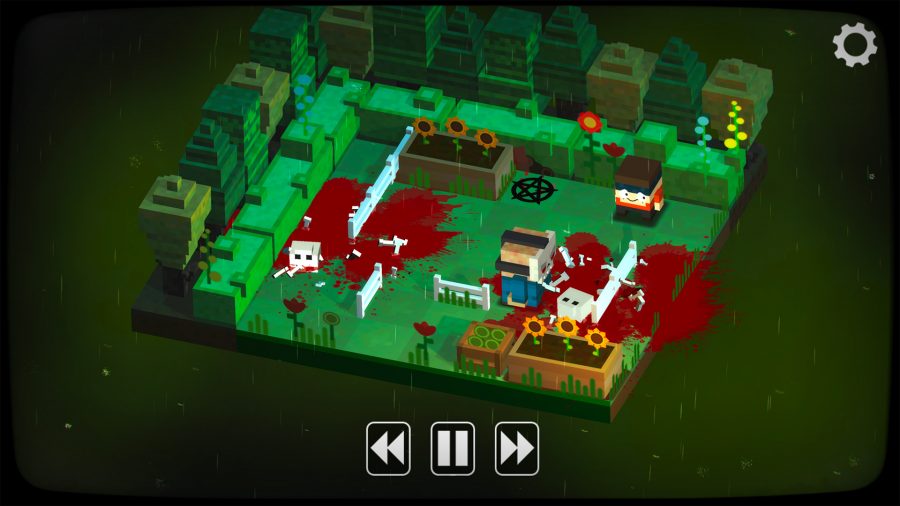 Jordan Forward, deputy editor: If you adore B-movie horror flicks then this slider puzzle game in which you’re tasked with killing campers in a limited number of turns is packed with references to the glory days of slasher movies. Each set of levels is loosely based on a different slasher franchise and your goal is to achieve maximum murder in as few turns as possible.

New mechanics are introduced with each set of missions – cleverly bundled as sets of scenes within a faded VHS box – such as armed cops who’ll shoot you if you finish a turn in their line of sight and blazing campfires you can throw campers into, so the puzzles stay fresher than the movies that inspired them. 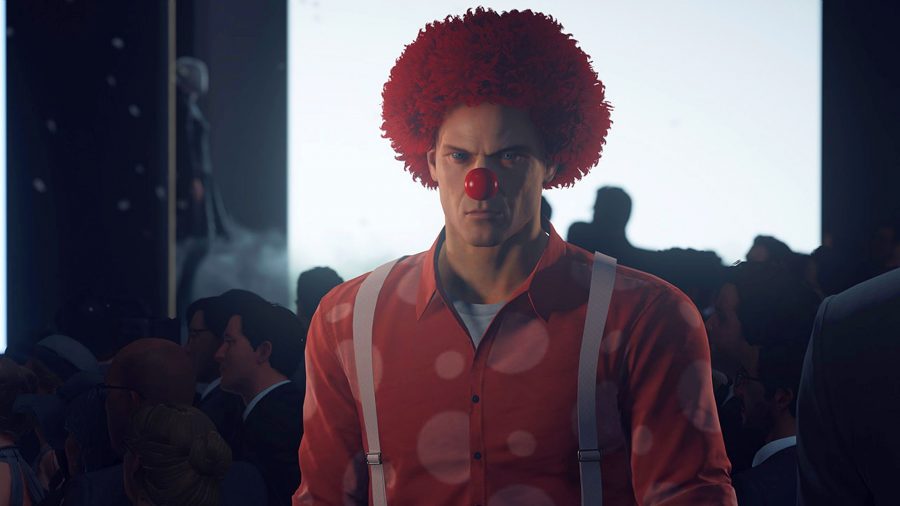 Jordan Forward, deputy editor: Whichever entry from the rebooted series you choose, it’s hard to deny the Hitman games are ready-made Halloween classics. Agent 47 is essentially a silent, masked killer, but rather than slaying canoodling camp counsellors he’s hopping around the world taking out greedy billionaires, human rights abusers, and evil scientists – it’s a slasher you can feel good about. Add in the copious grisly execution methods, countless outfit options, and 47’s Myers-like ability to remain inconspicuous despite being instantly recognisable, and you’ve got the perfect Halloween game. 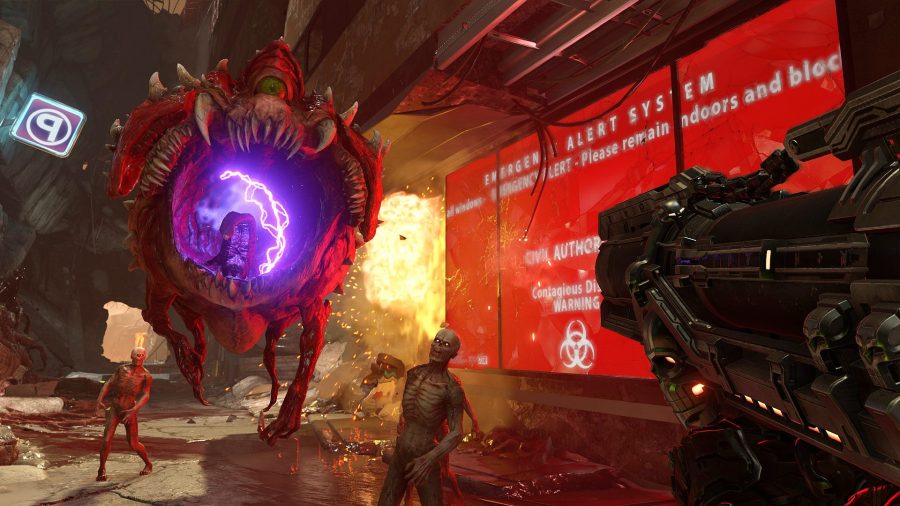 Ian Boudreau, senior news writer: Few games have embraced the brightly coloured, rubber-mask aesthetics of Halloween more gleefully than the modern Dooms. From neon green puddles of toxic ooze to wobbly demons that roar as you yank out their baleful eyeballs, Doom Eternal is an endless Halloween party in which you’re the scariest monster of them all.

Every level is decorated with pentagrams, scenes of ritual sacrifice, skeletons, and gore, so it looks the part too, and thanks to Doom Eternal’s raft of post-launch cosmetic additions, you can even customise everyone’s costumes. Mick Gordon’s floorboard-thumping soundtrack is wonderful of course, but Doom Eternal’s frantic arena fights work just as well – nay, better – set to the tune of Bobby Pickett’s novelty classic, The Monster Mash. Trust us. 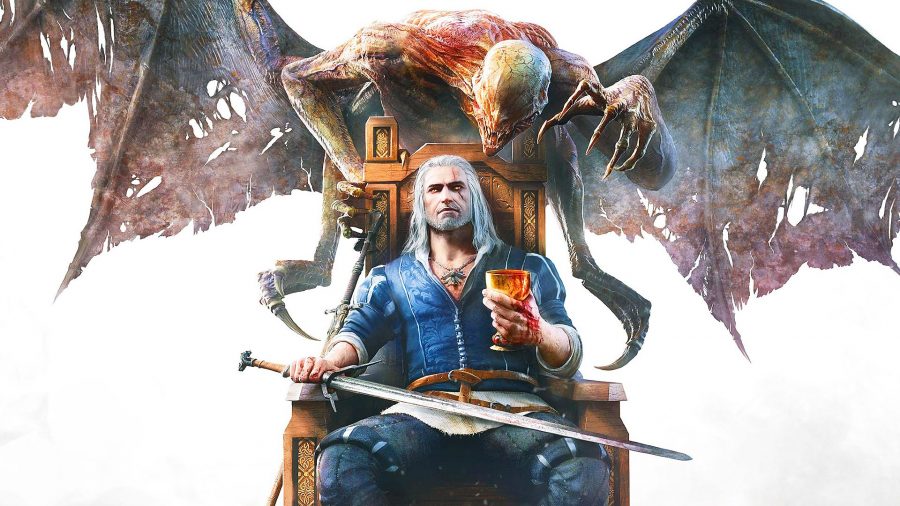 Samuel Willetts, hardware writer: While The Witcher 3 already has plenty of subversive and poignant stories filled with beasties to befriend or behead, its Blood and Wine expansion’s got you covered if you’re looking to sink your teeth into a vampiric mystery.

As a professional monster slayer, Geralt more or less plays the part of Van Helsing, arriving in the resplendent wine country of Toussaint to solve a series of bloody murders and drive a stake right through the heart of whoever’s behind them. A delectable blend of combat, conversations, and gorgeous environments keep the main story light and mercifully free of scares, but like much of The Witcher 3, this is still a full-bodied vintage when it comes to the quality of its writing and side quests. 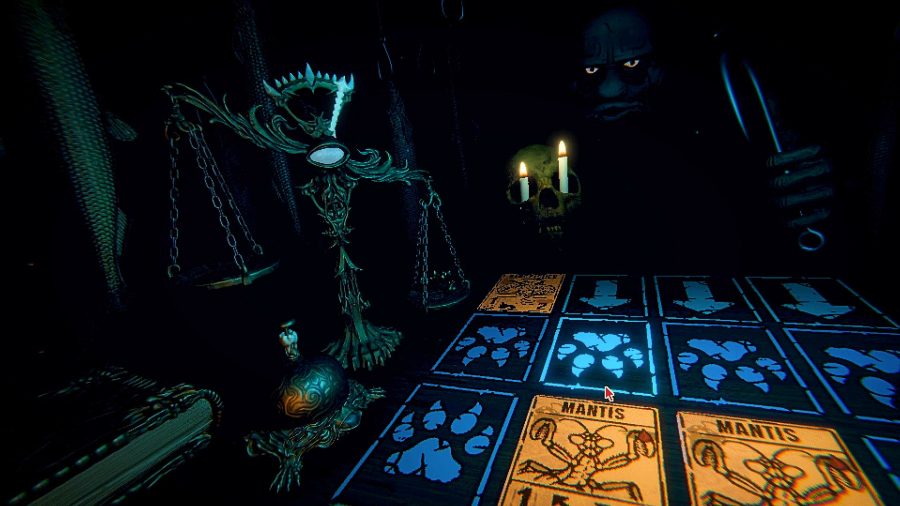 Dave Irwin, staff writer: Inscryption looks a lot spookier than it actually is. You sit across from a shadowy figure in a dark, candle-lit cabin, and play card games against them under pain of death. The dark twist is that all of your cards are creatures, and you need to pay for powerful cards with blood, which you can only get by sacrificing lesser critters.

You’re not bound to your shadowy gamemaster’s table either, as you’re free to explore the confines of the log cabin, which is filled with cryptic puzzles and dark secrets. Part gothic card game, part escape room puzzler, and plenty more that we won’t spoil. 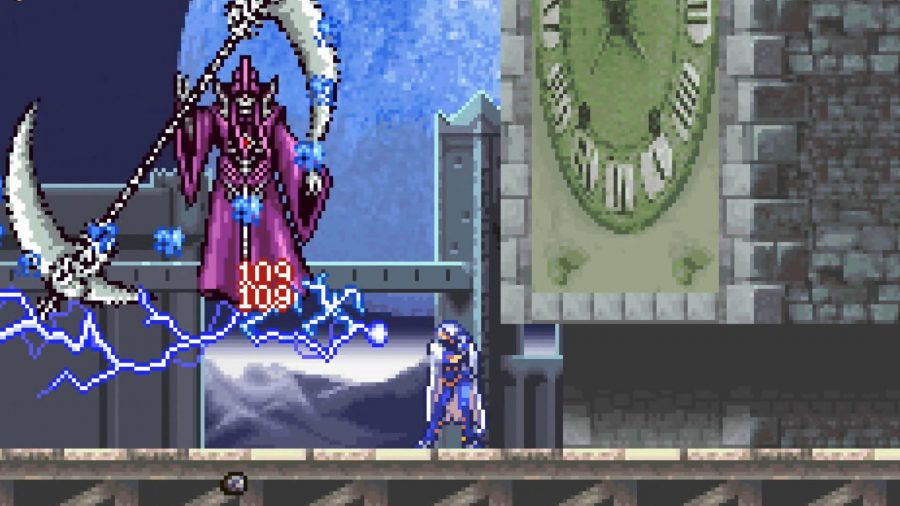 Dave Irwin, staff writer: Sadly, Symphony of the Night – the best Castlevania Metroidvania – is not officially available on PC. However, the Castlevania Advance Collection is a selection of three classic GameBoy Advance games. Each one has a castle filled to the brim with classic monsters like werewolves and zombies, but the emphasis is always on exploring every nook and cranny of the haunted fortress, collecting upgrades, and slaying bosses.

All three games are worth your time, but Aria of Sorrow is by far the closest to Symphony of the Night’s perfection. And if you’re a glutton for punishment then you can pit yourself against the ultra-hard Castlevania: Dracula X (known as Vampire’s Kiss in Europe). It’s more like the traditional Castlevania platforming games, and it may have the most brutal Dracula fight in the series. Spooky gothic castles packed with charismatic vamps, but not a shock in sight – perfect for this time of the year. 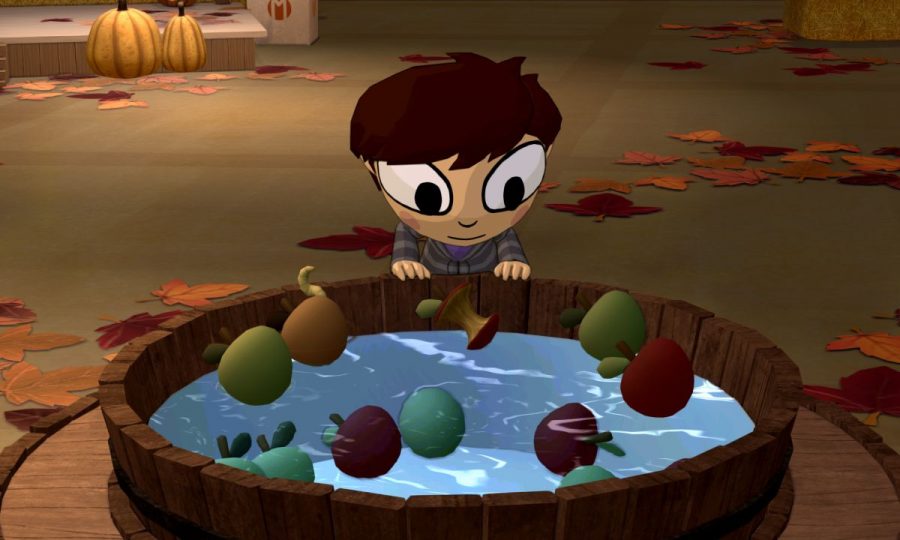 Dustin Bailey, senior news writer: Costume Quest is a Halloween game in a very literal sense – a lighthearted RPG where you play as a kid in costume out to collect candy in a suburban neighbourhood on October 31. The trick? The town has been overrun with real monsters, who you’ve got to defeat in turn-based battles using powers based on your current costume. Dressed as a robot? You can unleash a barrage of missiles at your enemies. In a unicorn suit? Use that magic to bring back an ally from a knockout.

This is a charming take on old-school JRPG tropes that stands among Double Fine’s most memorable creations, and it’s even got a bit of Christmas DLC so you can enjoy some seasonal gaming all the way through to another major holiday.