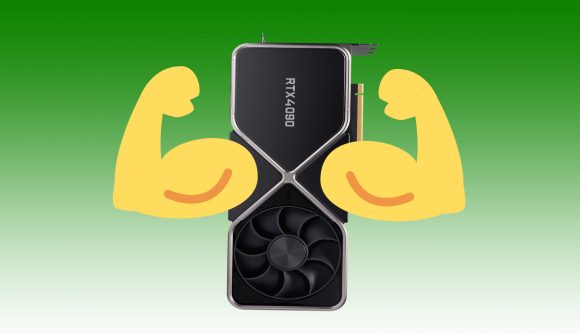 The Nvidia RTX 4090 is set to be the company’s next best graphics card, but rumours suggest the GPU could set a lofty 100 TFLOPs performance bar. According to reliable leaker Kopite7kimi, both the green team and AMD will supposedly participate in a “gaming war”, with contenders that far exceed the capabilities of their predecessors.

For context, if the RTX 4090 does smash the 100 TFLOP gaming PC bar, it’ll end up doubling the power of the RTX 3090 Ti. The next-gen AD102 chip is already shaping up to be a GPU goliath, with 18,432 CUDA cores and a 384-bit bus, meaning the card should feature enthusiast-grade performance that far exceeds anything on the market to date.

While the RTX 4090 will likely lead the RTX 4060, RTX 4070, and RTX 4080 into battle against both AMD and Intel, Nvidia is also toying with the idea of an RTX 4090 Ti. Whether the company’s monstrous conceptual graphics card actually shows up is another thing, but it may set the bar even higher with a “full fat” AD102 GPU and a whopping 46GB GDDR6X VRAM.

Kopite7kimi admits that they don’t have much insider information to share when it comes to AMD Radeon RDNA 3 GPUs. Therefore, the red team’s graphics card champion could trade blows with Nvidia later this year. That said, it’s important to remember the caveats associated with extreme levels of performance, as the RTX 4090 is rumoured to have a ridiculous 600W TDP.

Next-gen newcomers: Here’s everything we know about Nvidia RTX 4000

Nvidia and AMD aren’t the only forces occupying the next-gen battlefield, as desktop Intel Arc Alchemist GPUs will also join the fold this summer. However, from what we can tell, the new blue team graphics cards won’t quite reach the same heights as the RTX 4090 or Radeon RX 6900 XT, as the lineup’s high-end specs seemingly don’t quite match the best current-gen GPUs that are available now.