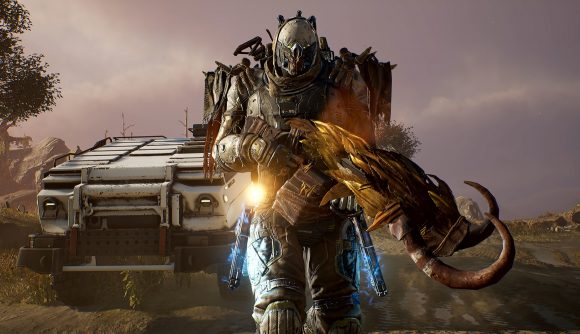 There’s a new patch out today for co-op game Outriders that addresses a few irritating multiplayer headaches that have been plaguing the looter-shooter for a while. While the patch notes themselves are a bit on the thin side this time around, developer People Can Fly also included an update that says players can expect patches more frequently from here on out.

There are three bullet points in today’s patch notes, in addition to the usual fixes for various crashes and memory leak instances. The update blocks players from kicking co-op partners out of an online game “towards the end of an Expeditions session,” the patch notes read. It also adds a new region based matchmaking system “to improve the quality of multiplayer connections,” the theory being that less geographic distance between players should make for better connection speeds. Finally, there’s been an update to the login screen text, which should now give you a better idea of where the sign-in process actually is.

Perhaps what’s more interesting in this update is what People Can Fly says it’s working on for upcoming patches. These should be arriving more frequently going forward, the studio says. The Outriders team is currently working on some remaining sign-in issues, and investigation is underway on “player survivability issues.”

People Can Fly says it will be discussing that issue specifically in the near future, as it has to do with some of the “deeper mechanics at play with Outriders.” The update is vague on this point, but it seems as though player survivability may be more misunderstood than it is broken.

Outriders has been updated!

Most exciting, perhaps, is the promise that the studio is currently testing out some re-tuned legendary item drop rates, hoping to make the loot loop “less frustrating, more satisfying.”

In any case, while Outriders has been struggling with bugs since launch, it also managed to reach more than 3.5 million players in its first month following launch, which is mighty impressive for a brand new franchise.