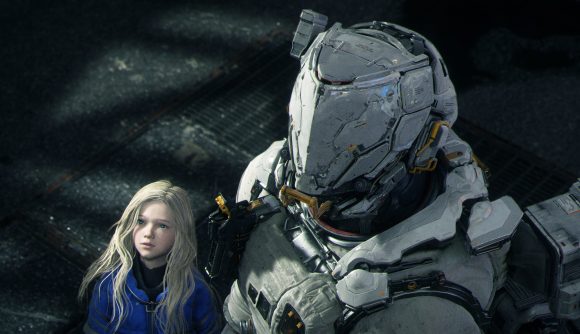 Now that the consoles have crossed over into next-gen territory, one thing’s for sure: Sony’s got great sizzle reels. While Microsoft has been keen to make sure you know how many Xbox games you can now get on PC, Sony’s not been so keen to make that selling point – yet many of the big best PS5 games you might be looking forward to are also coming to PC. And a bunch of those games just got new release dates as part of a Sony CES stream.

Buried among the copyright notices at the end of a PS5 sizzle reel at CES, we now know that Capcom’s bizarre not-quite-Kojima game, Pragmata, has been delayed from 2022 to 2023. Square Enix’s Project Athia is also currently set to launch in January 2022 – given that we still don’t have a proper title for that game yet, some fans are finding that release window pretty ambitious.

Among the other major titles confirmed for PC are Ghostwire: Tokyo, the horror-action game from Tango Gameworks and Bethesda, is set to launch in October 2021. Also, the Hitman 3 release date is now set for Januray 2021. I thought it was January, but no, apparently it’s Januray. (As a writer, it is grossly irresponsible of me to make jokes about other people’s typos, but hey, it’s fun.)

Here are all the relevant release windows for those PS5 games that have also been confirmed for PC:

Ratchet & Clank and Horizon: Forbidden West are both set for release in 2021 as well, but for now those are proper PS5 exclusives – though the PC port of the previous Horizon game gives us hope for further console games on PC.

If you need to see it all for yourself, the video above will show you those dates at the 10:38 mark.