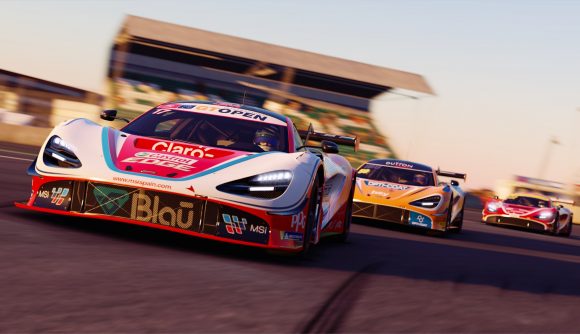 The Project Cars 3 release date is nearly upon us, but today? Today is reviews day. Games critics around the world have had countless runs around Project Cars 3‘s many tracks and rendered their evaluations of Slightly Mad Studios’ third tentpole racing game. By and large, it sounds as though the consensus is that Project Cars 3 isn’t just one of the best racers the studio’s made, it’s also the series at its most accessible.

Jordan Forward strapped in behind the wheel for our Project Cars 3 review, and he’s clearly had fun with the game. “Taking a ’66 Mustang through the iconic Laguna Seca corkscrew will make your stomach turn,” he writes. “You’ll feel the tail kick out as you exit, the orgasmic shudder of the suspension bouncing with the elevation change, and the momentary loss of control as you hurtle over the crest, tyres barely in contact with the tarmac beneath them.” Indeed!

Project Cars 3 sports an all-new handling model, this time without the primary focus on racing wheels. That’s made the game much more playable for the Forza Motorsport crowd, and in general a more fun experience all around, as Martin Robinson writes for Eurogamer.

Project Cars 3 reviews are still trickling in, but so far it’s sitting on a fairly strong average of 79% on OpenCritic. Metacritic has not, at the time of this writing, published its aggregate score.

Here are the Project Cars 3 reviews:

Project Cars 3 seems to have impressed most critics, and you can get a bit more of a taste of the action with our Project Cars 3 gameplay preview. Otherwise, you can head over to Steam, where you’ll be able to start putting tyres on the tarmac August 27.