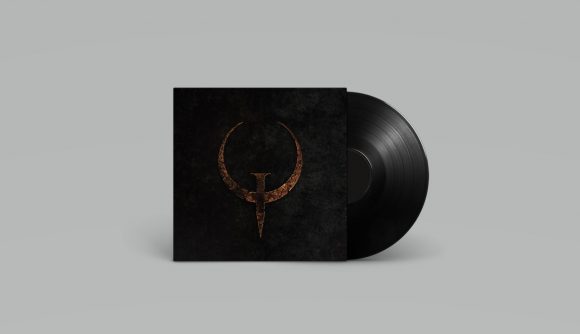 It’s hard to convey quite how big a deal it was in 1996 when id Software’s Quake launched with a soundtrack by none other than Nine Inch Nails. Quake was a new evolution in games – it was dark, gritty, and ‘adult’ in a way that colourful graphics and AdLib sounds hadn’t allowed for up until then, and Trent Reznor’s sound design and theme music gave the whole thing an edgy credibility. Now you can finally buy the remastered Nine Inch Nails Quake soundtrack on vinyl.

Nine Inch Nails has been planning this for quite some time – the vinyl pressing briefly went up for pre-order three years ago, although it seems to have been by accident. Now it’s the real thing, and you can go over to the band’s official site to order the 180 gram double LP right now. It costs $35 USD (or about £27).

Reznor has worked on soundtracks since Quake: as Pitchfork notes, he and Nine Inch Nails producer Atticus Ross have won an Oscar for their score to David Fincher’s The Social Network (2010) and have been nominated for two Emmy Awards for their soundtrack to the HBO series Watchmen.

If you’ll indulge us, let’s just take a moment to appreciate how great the main theme to Quake was (and this isn’t the remastered version you’ll find on the new vinyl):

Then there’s the creepy, eight-minute build of The Hall of Souls:

If you were keeping up with all things Quake, you’ll have taken the opportunity to pick up a free copy of the original FPS game during QuakeCon this summer. You’ll also no doubt be disappointed by the news that Doom composer Mick Gordon – whose soundtrack was deeply influenced by Reznor’s – will not be returning to work on the soundtrack for Doom Eternal: The Ancient Gods – Part One.