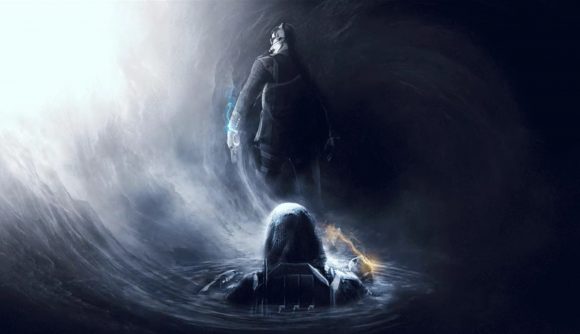 It’s time to start the countdown to Rainbow Six Siege Year 4 Season 2, as Ubisoft has just posted the first official teaser for the new season. It’s a lightly animated image, which features one operator emerging from a watery hiding spot, and another suited operator holding a pistol in the background. This comes with the caption “Look carefully… what do you see?”

It all matches with what we’ve seen from recent leaks, including some reliable-looking gadget leaks. The aquatic figure matches the reports of a Danish frogman we’ve seen, and the suited figure similarly lines up with what we’ve heard about a US Secret Service agent – apparently, their names are set to be Nökk and Warden.

We’ve heard plenty of official detail on what to expect from Y4S2 even before this Twitter tease. Early teasers like the Hammer and Scalpel cinematic presented plenty of easter eggs suggesting future additions, including hints at a new Danish operator. More detailed teasers have shown that the Danish operator’s gadget will allow them to “blend and adapt into environment,” so expect some stealth abilities.

According to the Year 4 roadmap, the Danish operator would be joined by one from the US Secret Service – so all’s on track. We also expect Season 2 to feature a rework for the Kafe map.

We interviewed Siege game director Leroy Athanasoff about Year 4, including why we’re getting so many map reworks instead of proper new locations. You can follow that link for plenty more on what to expect as Year 4 rolls on – expect the teasers to continue throughout the week.