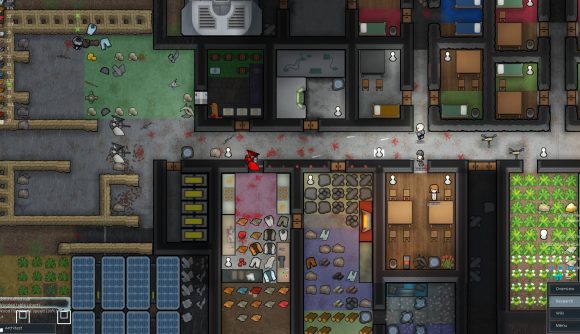 RimWorld spent enough in early access that it’s easy to forget that it officially launched last year. 2018 was a good year for the colony management game, too – it wound up hitting the one million copies sold mark well before it left early access several months ago. It’s also, it seems, the highest-rated game of 2018 on Steam.

RimWorld developer Tynan Sylvester shared the stats collected by Steam250.com on Twitter. The site looks at player reviews on Steam and works out a score, and RimWorld is at the top of the pack for 2018 releases with a 98% positive rating.

It’s an impressive feat for a game that takes a lot of inspiration from the notoriously difficult-to-learn Dwarf Fortress. RimWorld, mercifully, is quite a bit more accessible than its predecessor, and its easy moddability doesn’t hurt either.

If you’re unfamiliar with RimWorld, it’s a game about shepherding a group of planetary colonists who have crash landed on an alien world. Your colonists all have specific skills and personalities, and RimWorld’s simulation is detailed enough that they create incredibly compelling stories just by bouncing around in the procedurally-generated environments the game creates.

Sylvester thanked all the fans who left reviews for RimWorld, and said he hopes to keep serving them well.

RimWorld is the #1 top player-reviewed game on Steam for 2018! From all categories.

Thanks so much to all those who took the time write a review, and to the whole community. I hope to keep serving you well.

The top ten player-rated games on Steam for 2018 are as follows:

As we’ve noted here, 2018 on PC was a year where triple-A tended to be disappointing, while indie games led the way – and that’s certainly reflected in this top ten list. While RimWorld wasn’t our Game of the Year – that honor went to Celeste – it’s certainly a game that’s worth your time, particularly if you enjoy the triumph and tragedy that go along with running a desperate colony of tiny humans.