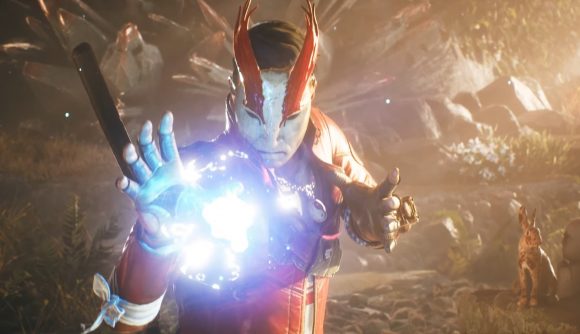 We caught wind of a new Shadow Warrior game last week, and now it’s confirmed: Shadow Warrior 3 is indeed on the way, with a gameplay reveal coming up soon. For now, there’s a new teaser trailer that shows off some of what’s new: Lo Wang can wall-run, use a grappling hook, and give demons the finger – standard ninja stuff, really.

The new trailer opens with Lo Wang strolling through a red-tinged bamboo forest, gabbing away on the phone with his agent Vern. They’re ironing out a few details about the upcoming teaser trailer filming, as Lo Wang (who’s wearing the mask of his demon companion Hoji) stretches and limbers up for his performance. A stray demon or two can be seen skulking in among the bamboo stalks, and of course there’s rabbit innocently foraging.

“So hot to be working for the Hogs again,” he says, referring to developer Flying Wild Hogs. “Such a talented group of nerds.” He’s less charitable toward publisher Devolver Digital: “Devolver? They’re overrated. But, they pay the bills! So what do I care, right?” 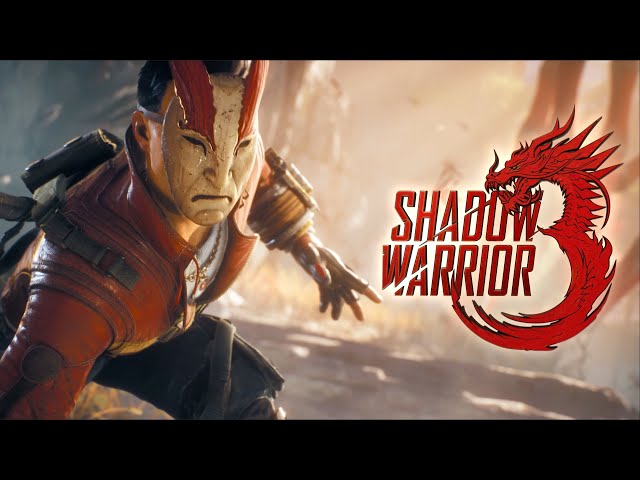 Lo Wang sprints over a cliff edge and then runs Titanfall-style along some rock walls, firing his grappling hook toward a loop. Vern calls him back and interrupts mid swing, and Lo Wang falls short of his target, and he’s menaced by a group of demons – including a large albino gorilla demon reminiscent of the Guardian Ape from Sekiro: Shadows Die Twice.

There’s a fight, and we get to see some of Lo Wang’s arsenal: his trademark katana and pistol, as well as some more mystical powers. A blast of energy blows several demons backwards, impaling one on a series of spikes, and an uppercut from Lo Wang decapitates another.

Toward the end of the fight, Lo Wang crouches and appears to be preparing to fire a Street Fighter-style hadouken fireball, but as the demons flee, the energy defuses and he flips his middle finger up.
“I’ll see you at the gameplay reveal, chumps!” he shouts, firing his grappling hook and zipping up and away.

The trailer doesn’t specify, but it seems highly likely that the Shadow Warrior 3 gameplay reveal will be part of the Devolver Direct event scheduled for Saturday, July 11, at 20:00 BST / 15:00 EDT / 12:00 PDT.
If you like your martial arts with a bit less smarm, have a look at our list of the best samurai games on PC.

The Shadow Warrior 3 Steam page is now live, with a release date set for 2021.