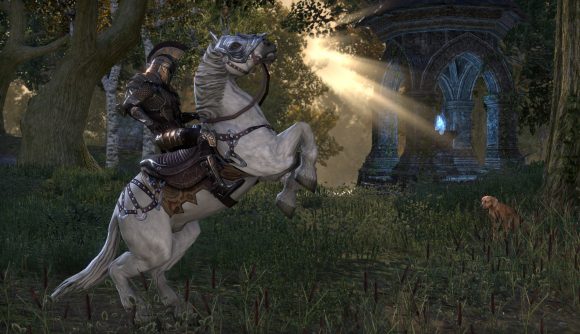 Bethesda’s E3 2019 press conference had a bit of everything. New games like head-to-head sci-fi battler Deathloop got announced and the lid was lifted on fresh content for Rage 2 and Fallout 76. But, the two games most fans most wanted to see more from were almost absent: Starfield and The Elder Scrolls 6.

We shouldn’t be too surprised, however, as veteran game director stated in the run up to E3 that Starfield at E3 2019 would be unlikely. In fact, he said “everyone should be very patient”. That may mean the space-based curio may not even be at next year’s E3, so that certainly puts the Starfield release date back a fair bit.

Nevertheless, Howard stressed at the beginning of the conference that Bethesda is “still hard at work on our next-gen RPGs Starfield and The Elder Scrolls 6″. Sadly there was no ‘one more thing’-style announcement relating to those highly-anticipated titles to put a cherry on the top of a distinctly bloody and fiery briefing. When The Elder Scrolls 6 does come out, you’ll have plenty of time to make up for, though: Bethesda reckons you’ll be indulging in The Elder Scrolls 6’s gameplay “for a decade at least.”

That, of course, is mostly to do with the hundreds of excellent Skyrim mods that are active for the near decade-old open-world game, so expect to see similar longevity from the sixth outing. What’s more, Skyrim boasts one million mod downloads. When it comes to Starfield, however, we still know very little a year on from its full reveal – but it will be another “big single player game”.

Role play: Venture out in the best RPGs on PC while you wait

If you’re done with the land of the Nords, other, more specific, Elder Scrolls announcements featured at Bethesda’s show that you can get excited about in the meantime. The Elder Scrolls Blades is getting a dragon questline and, for the massively-multiplayer fans among you, The Elder Scrolls Online’s Dragonhold DLC will see you battling even more of the fire breathers as you round out the Year of the Dragon season. But, when it comes to the big two Bethesda titles – including The Elder Scrolls 6 release date – you’ll have to be patient, just like ol’ Todd says.