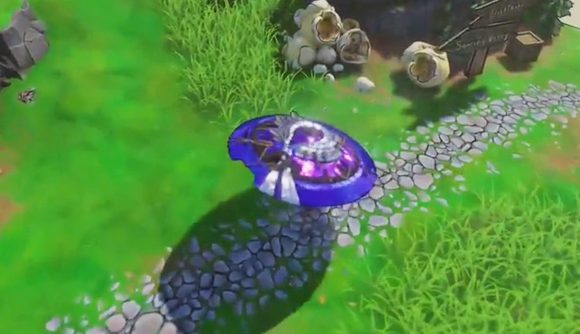 Tiny Tina’s Wonderlands players have been having a great time with one rather oversized gear piece. The new PC game is full of unique and wacky fantasy gear to outfit your characters with, but one hat in particular has drawn the attention of the FPS game’s community because of its larger-than-life appearance on the overworld map.

The Ranger’s Shade hat, which was initially shown in concept art for the Spore Warden class, has a fairly traditional conical hat style akin to that worn by Mortal Kombat’s Raiden. It’s sizable, but nothing too out of the ordinary. That all changes when you head out to the overworld map, however.

For those of you who haven’t played Wonderlands, one of its features is interim jaunts across an overworld map designed to represent the tabletop environment of Bunkers & Badasses, with characters represented by large-headed chibi figurines. In this mode, players found that the Ranger’s Shade hat was showing up at a vastly increased size, giving it a rather striking appearance.

It’s unclear whether this discrepancy is intentional or a bug – it seems likely that it could be a scaling error, but it would also be perfectly in line with the tone of Wonderlands. There was initially concern that the size of the hat could cause issues fitting through parts of the overworld map, but players who have been using the hat have reported that it seems to just clip harmlessly through the environment.

When you play as a hat. from Wonderlands

If you’re looking to get your hands on this headpiece for your Big Hat Logan/Ranni the Witch cosplay (delete as appropriate), the place to head is Karnok’s Wall, where you should be able to nab it from the Son of a Witch boss fight.

Hat doesn’t scale properly in the over world. from Wonderlands