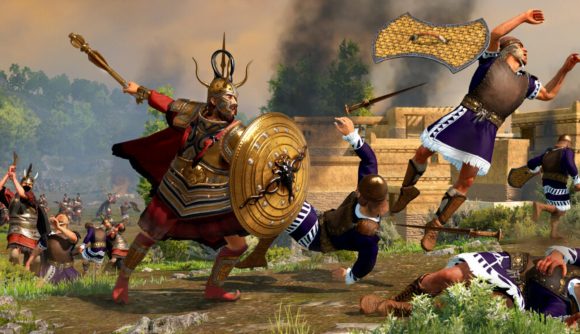 If there’s one major lesson we can draw from the Iliad, it’s that everything is better with friends. You’ll soon be able to join your pals in Total War Saga: Troy, as the strategy game’s multiplayer beta is set to begin November 26.

Being that it’s one of the ancillary ‘Saga’ titles in the Total War catalogue, Troy has seen features trickle out since its launch in the early fall. Total War: Troy saw a photo mode, the usual follow-on blood and gore DLC, and modding support all arrive over the course of October. Now, Creative Assembly is ready to start letting players try out multiplayer – a key component of most Total War games of the past.

The developer says Troy players can expect custom battles for up to eight players, the usual co-op multiplayer campaign, community map support, “and much more” to come as the multiplayer beta gets underway. With Troy’s focus on mythic heroes, multiplayer battles are sure to be interesting – it’s prime grounds for you to settle those long-standing arguments about whether Achilles or Hector would win in a straight-up fight.

The multiplayer beta for a Total War Saga: TROY is coming on November 26th!

Custom multiplayer battles up to 8 players, community maps support, co-op multiplayer campaign and much more coming in the future…

Will you please the gods or will you yield ground to your enemy? ⚔️ pic.twitter.com/cZ8iVDnZbX

Total War Saga: Troy uses a new trade system that focuses on raw materials rather than currency, which could make for interesting dynamics in the co-op campaign. What will undoubtedly be entertaining, however, is teaming up with a friend to go bash down the gates of Troy together – or at least, sneak some Greeks inside by means of a specially designed horse.