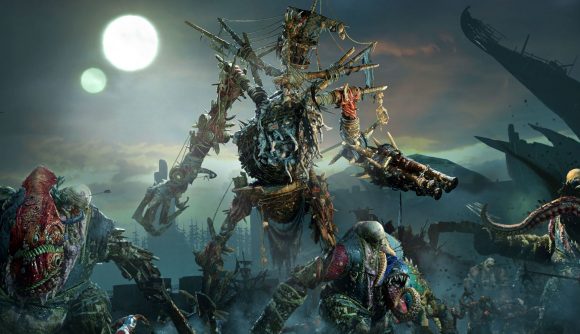 Total War: Warhammer III is coming, but its predecessor Warhammer II still has one last arrow in its quiver before it walks off into the sunset, its work finally done. During the big hubbub around the third game’s announcement, a bunch of news came out of the official FAQ Creative Assembly always releases whenever it reveals, well, anything.

This document mainly focused on Warhammer III, but it had a few things to say about Warhammer II as well. One was that the popular Total War game would be coming to the Epic Games Store, but another was that there would be one final piece of DLC released for the game before it gets consumed by its younger sibling.

Now, Warhammer II recently received a free piece of DLC as part of the Rakarth update, but we’re led to believe the final expansion mentioned in the FAQ will be a premium expansion, probably a final ‘Lords’ pack. Everyone (no one) hopes it will be Beastmen themed. Whatever it’s going to be, we won’t find out for a couple of months at least.

This was confirmed on the r/TotalWar subreddit by Creative Assembly’s lead community manager Grace Carroll (known on Reddit as ‘Grace’). A subreddit user was speculating as to whether we’d hear about the final Warhammer II DLC this month, to which Carroll responded: “No, there won’t be any news on WH2 DLC for a couple of months at least”

Will the last Warhammer 2 DLC be announced in April? from totalwar

Some have speculated this means June at the earliest. The accepted definition of “a couple” is at least two, whereas a “few” is generally accepted to mean three. If it’s any consolation, Carroll also confirmed last month that more Total War: Warhammer III news is expected in May.

Total War: Warhammer III’s release date is later this year. In the meantime, you can check out everything we know about the Warhammer III races on offer, including the debut of Cathay.