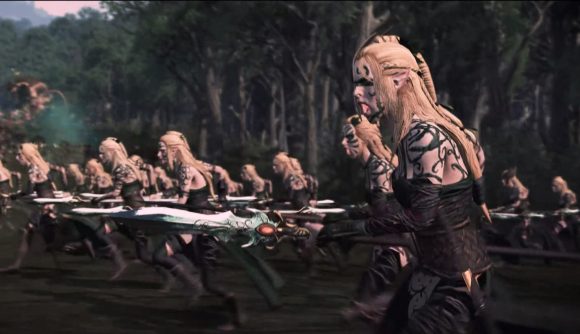 Creative Assembly has provided some new details about the next DLC coming to Total War: Warhammer II. It’s a Lord Pack, and will feature the Wood Elves faction – but that’s just the tip of the iceberg. The latest devblog also details a new content scheme that will change the amount of new free stuff you get from here on out depending on how much Total War: Warhammer stuff you already own.

First, though, the Lord Pack. Creative Assembly says the next DLC will indeed be a Lord Pack and it will ‘focus’ on the Wood Elves, who you’ll remember from the Realm of the Wood Elves DLC expansion for the original Total War: Warhammer. Previous such packs have featured opposing Lords from two different races, but it’s not yet clear from which race the second lord will come. The pack’s accompanying update will feature a third legendary lord, and they’ll be free as before, but accessing them works slightly differently now.

If you only own the Total War: Warhammer II base game, the arrival of the new Lord Pack will mean you’re getting a new free hero, plus the game update with various and sundry bug fixes and rebalancing changes. That’s it – it’s still free, but base game owners are no longer getting a free legendary lord when updates roll out.

If you own Warhammer II and buy the new Lord Pack, you’ll be getting the above plus the usual lord pack contents – two new lords, new units, and so on. It’ll work like other recent lord packs that have featured factions from the first Total Warhammer and made them playable in Warhammer II’s Vortex campaign, in the sense that if you missed Warhammer I entirely, you effectively get a whole new race.

Moving right along, if you own both Total War: Warhammer and Warhammer II, and thus have access to the combined Mortal Empires campaign, the new Lord Pack will as ever bring a rework for the Wood Elves in that mode.

Finally, if you own both base games, the new Lord Pack, and the old Realm of the Wood Elves DLC, that’s when you’ll get the free Legendary Lord.

It’s all a bit confusing, but the general rule of thumb is that you’ll be getting more content as a reward for owning more pre-existing DLC and having stuck around since the beginning. The blog says if this new format is well-received, it might be repeated in future.

The identity of the three incoming lords is an open question, and so we went to the basement to interrupt Rich as he glued the final bits of specially sourced gravel on the bases of a beautifully painted battalion of squigs. He reckons the likeliest candidate for a new Wood Elf lord is Araloth, who he describes as “a grossly overrated character in my view whose big schtick is he has a bird.” The Sisters of Twilight, a pair of twins who ride into battle on a forest dragon, are also a possibility.

Inferring from the developer’s use of feminine pronouns, he reckons the free lord is almost certainly the Wood Elves’ Queen Ariel, one of Warhammer Fantasy’s most powerful wizards and a certified demi-goddess sporting magnificent butterfly wings.

The devblog covers some non-Warhammer Total War news as well: the Nanman are on their way to Total War: Three Kingdoms in the game’s first full-fledged expansion pack, which will also introduce gate pass battles and settlements to allow you to control choke points around your territory more effectively. The devs note that when the expansion ships, some players may notice that Hulao Pass has been placed incorrectly – they’ll be addressing that in a future update, however.

For Total War Saga: Troy, the news is a post-launch content roadmap that confirms Ajax and Diomedes as DLC characters arriving sometime this winter. Before that, we’ll see the Amazons faction and full mod support introduced in September, with the Blood & Glory DLC and free Artemis addition arriving in October. Multiplayer for Troy will roll out in November.

Keep in mind, too, that when the Total War Saga: Troy release date arrives August 13, you’ll have 24 hours to claim it for free on the Epic Games Store.