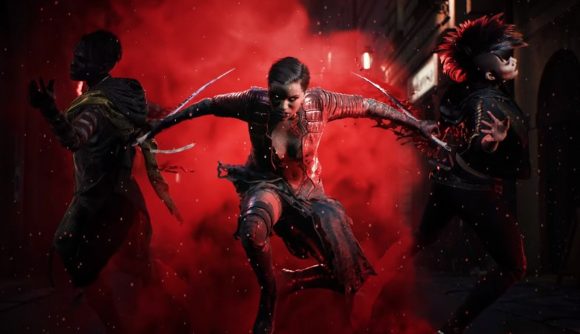 A Vampire: The Masquerade battle royale game has been added to the list of upcoming games based on the tabletop RPG. Developer Sharkmob will be putting the vampiric spin on the multiplayer game-type.

The announcement was made in a teaser video from Sharkmob. The 32-seconds of cinematic footage has a female vampire warrior battling a number of other bloodsuckers using guns, blades, and some good ol’ superhuman athleticism. In the description, we have some basic details: solo and teams will be available, and you’ll have conventional weapons and supernatural powers at your disposal. It looks like some gloomy streets of Prague will be the island, so to speak, and an antagonistic force known as the Entity will play a role, maybe as AI that hunts you if you find yourself outside the shrinking circle, at the behest of series baddies the Inquisition.

The as-yet-untitled battle royale vampire game will be Sharkmob’s first major project. The Swedish studio was founded in Malmö in 2017 by former Massive Entertainemtn and IO Interactive devs, and has since expanded to a second office in London. This is one of three games the team has lined up, the other two described on the developer’s site as “highly ambitious, AAA quality projects powered by the Unreal Engine”.

You can watch the trailer below:

The release window is set for the second half of 2021. Paradox Interactive bought the overarching White Wolf license in 2015, and appears to be publishing here, going by the fine print. Vampire: The Masquerade – Bloodlines 2, the long-awaited sequel from developer Hardsuit Labs, was delayed in August, now also due to arrive in 2021.