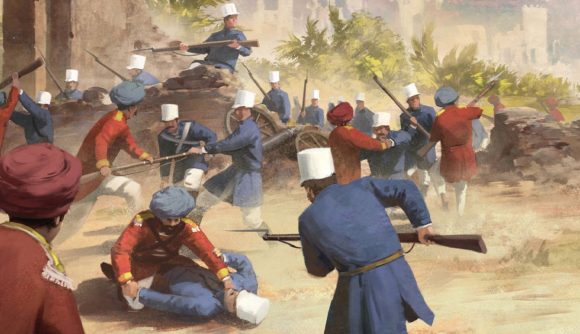 One of the most intriguing (and potentially divisive) moves Paradox Interactive is making with Victoria 3 is in how this new version of the grand strategy game will handle combat. Wars in Victoria 3 are going to be different from anything we’ve seen in Paradox’s games to date, and the latest developer diary digs into the way individual battles are handled in the new system of fronts and generals.

In wartime, Victoria 3 nations will mobilise conscripts to form battalions at conscription centres, and these battalions will head off to a front – the contested border between warring nations. A battle happens when a general on one side receives an attack order, which will start filling an ‘advance’ meter. Once that’s full, a new battle starts.

At the outset of a battle, both sides follow an initial sequence of preparatory moves. Beginning with the attacker, the sides will take turns selecting their commanding general for the battle, then determine the province where the battle is actually happening, and then take turns first deciding on the number of units that they’ll bring to the battle, and finally selecting those units.

Once each side pulls a randomised battle condition (which will add modifiers to fighting capabilities or effects), the battle commences. As the dev diary explains, there’s a set sequence of calculations for each round. First, both sides work out how many battle-ready troops it has; next, both sides will inflict casualties on each other; then both sides will attempt to recover their wounded; both sides will calculate the morale damage they’ve suffered in the preceding action; and finally, if one side is eliminated or retreats, the battle concludes.

While the bulk of the diary is devoted to explaining the mechanics of battle, there’s also mention of how Victoria 3 handles casualties. Not everyone wounded in battle ends up dying: some of those pops are converted into ‘dependents’ of other pops back home. This means, then, that even a war that is ‘successful’ on paper could end up costing you political stability, and be a long-term drain on your economy as your people struggle to support a huge number of wounded veterans. It’s another way Victoria 3 is making war a costly endeavor.

We still don’t know when the Victoria 3 release date will be, so hopefully Paradox will have news on that front before long.