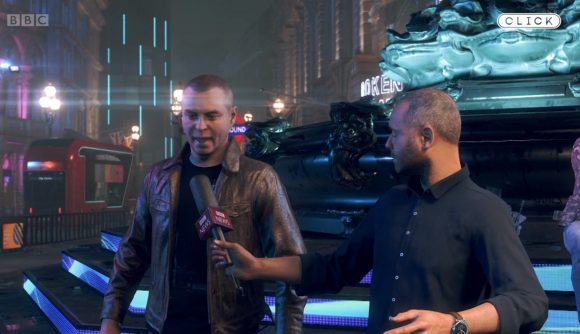 This is a new one: the BBC sent a reporter to Canada recently to conduct an interview in the middle of Piccadilly Circus. But this wasn’t the real-world Piccadilly Circus, of course – instead, the interview took place in the near-future vision of the landmark intersection that we’ll be seeing in Watch Dogs: Legion later this year.

Cieslak begins the interview with a question about how Brexit will figure into the game, pointing out that its inclusion may anger some players. In the past, Ubisoft has often reverted to boilerplate about its games not being ‘political’ (except when they are) but Hocking takes a refreshingly different tack in this discussion.

“I look at [the game] as a creator of culture,” Hocking says. “If we were creating films or movies or books, it’s the same with videogames. It’s our responsibility to look at the things that are happening in the world around us and have something to say about that.”

Hocking also explains that Legion will be looking at other hot topics in current events, such as driverless vehicles and drone technology.

After Ubisoft announced several game delays following the underwhelming launch of Ghost Recon Breakpoint, we’re still not sure when exactly the Watch Dogs: Legion release date is coming. All we know right now is that Ubisoft expects to launch the game sometime this year.