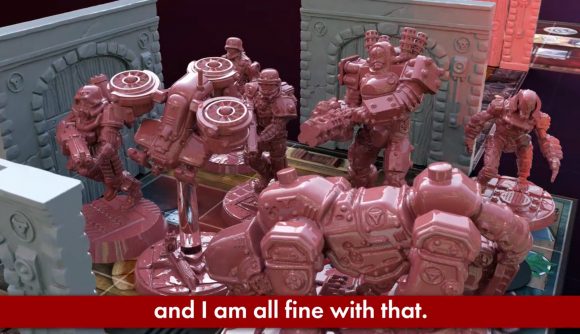 Wolfenstein has always been about killing Nazis, but what if you could do all that… on your tabletop? It looks like we’ll be able to find out, thanks to a Kickstarter campaign for Wolfenstein: The Board Game, which is about to wrap up after having pulled in more than 10 times its initial goal in funding.

Wolfenstein: The Board game is being made by Archon Studio, a Polish tabletop gaming company that already has several successful Kickstarter campaigns under its belt. Their games lean heavily into the “huge box of plastic miniatures” genre that’s been popular on Kickstarter for years, and their Wolfenstein game appears to be no exception: as pitched, the base game comes with 55 minis modeled in high-impact plastic, plus plastic doors and barriers. The models include Mecha-Hitler, making his return after nearly 30 years.

You also get 16 map tiles, which form the rooms and hallways you’ll be exploring during your cooperative missions, plus 182 cards depicting the various pieces of equipment, events, and enemies you’ll encounter in the dungeons of Castle Wolfenstein.

The game itself uses an action point system that allows you to move, shoot, or interact with the environment whenever you choose, as long as you have the AP necessary to do so. Weapons rely on ammunition, and each one has three firing modes – but you’ll need the right rounds loaded to pull off that fancy shot.

Archon Studio says it’s secured the license to work on the franchise from the current IP holder, MachineGames, and the board game designer is using many of the characters found in the recent run of Wolfenstein games. The Wolfenstein All-Stars expansion adds Caroline Becker (from Wolfenstein: The New Order), Sigrun Engel and Grace Walker (from The New Colossus), and Jessie and Zofia Blazkowicz (the twins from Youngblood).

As usual with games that feature lots of minis, Wolfenstein: The Board Game comes with a hefty price tag: the base game is offered for a minimum pledge of $120 (£97), and you’ll have to kick in $135 (£109) for the full game plus the Old Blood and All-Stars expansions.

The Kickstarter is set to end April 28, and Archon Studio says it expects to ship the game in August 2021. Note that it won’t be available in Germany or Austria due to local laws governing the subject matter depicted in products that can be considered ‘toys.’ So far, Wolfenstein: The Board game has raised more than $538,000 in funds. Its initial goal was $50,000.