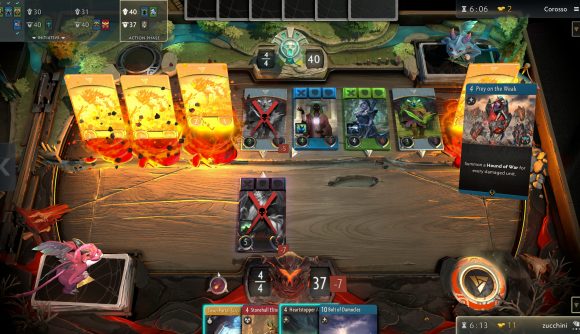 Valve has officially announced that it’s working on a re-release of Artifact, and the news seems to have reignited interest in the game: this weekend, more people were playing Artifact than the game has seen in a year.
According to Steamcharts, Artifact saw a peak of 535 concurrent players Saturday at about 12:00 GMT.

While a few hundred players isn’t going to put Artifact shoulder to shoulder with Steam’s most-played games, that is a remarkable figure for Artifact – its monthly average player count has been below 200 since April of last year, dipping into the 70s during July and August.

Now, Valve has confirmed what had been rumoured for a while: it’s working on a revamped, retooled version of the card game that ditches the original user market card economy for a free-to-play model that doesn’t involve selling cards at all. The new version makes so many big changes to the way Artifact works that Valve has been referring to it internally as Artifact 2, and the company announced two weeks ago that the game is ‘under construction.’

While that news is likely helping drive some players back to Artifact, it’s also likely that the increase in player count also has to do with more people on Steam in general due to world-wide lockdowns in response to the coronavirus pandemic. That outbreak has more people playing games as they wait out lockdown and quarantine periods, and Steam has posted record-breaking numbers of concurrent users every weekend for the past month.

Valve hasn’t said when we can expect to see the next version of Artifact, but if you were one of the people who bought a starter deck around launch, now might be a decent time to get reacquainted. It’s a rewardingly deep and challenging game, as you can read in our Artifact review – and it’s likely you’ll be able to find an opponent now that players are filtering back in. Check out our guide to Artifact decks for beginners if you need to refamiliarise yourself with the rules, too.