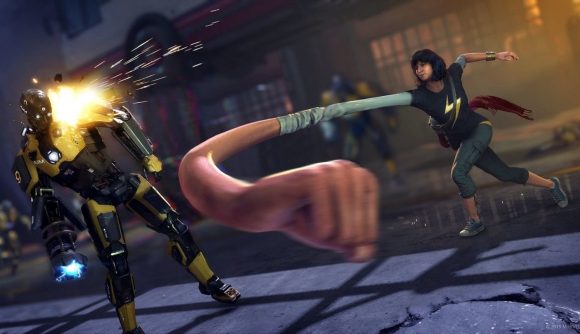 The first major patch for Marvel’s Avengers has been rolled out, and it fixes a lot of issues. Over 1,000 bugs, glitches, and complaints are addressed in the action-adventure game, in just about every category you care to mention.

The patch notes lists everything, and it’s quite the list. The campaign is first, and issues addressed include bad save states, pause menus being blocked, and some geometry struggles. Several instances where players could find themselves teleported out of the world, or stuck out of bounds, or stuck inside the walls have been fixed. Multiplayer and matchmaking next, with a considerably shorter amount of tweaks, mostly addressing issues where players are prevented from joining others matches.

The UI has been scrubbed up, improving text and localisation, and making notifications clearer. The War Table will now show a different colour when a new mission is available, and if you don’t have the appropriate skill, hackable terminals will now explain why they’re inaccessible. Thor, Iron Man, Black Widow, and Captain America have all had costume and animation stitch-ups to fix minor cosmetic and control issues.

Combat’s been tightened up for several heroes, including Kamala, who suffered from an involuntary throw, and her embiggened arm being stuck in place after a throw. The Hulk could cause double-vision on another player’s screen, which honestly reads more like a feature than a bug, and Captain America’s shield won’t be stuck in Iron Man’s energy barrier any more.

Resources won’t disappear when they reach 32,000, and Crystal Dynamics asks that any players who’ve been affected by this to reach out to have the items restored. For PC, the mouse and keyboard UI has been improved, backup saves have been added, and overall memory usage reduced.

We thought Marvel’s Avengers was good but need improvement, and this patch is going some way towards addressing all the issues. If all of these fixes make you more inclined to step up the mantle in the new PC game, we have guides for Iron Man, Black Widow, Hulk, and Ms. Marvel.