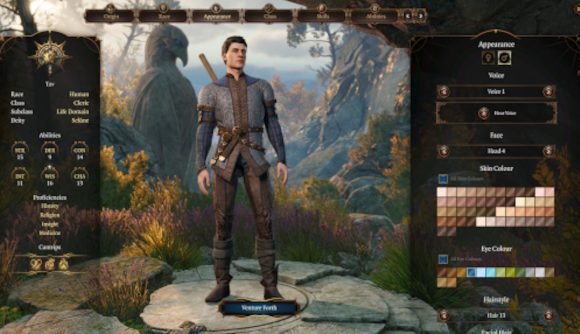 You can do a lot in the Baldur’s Gate 3 character creator. You can build your idealised fantasy self, a devious or perhaps misunderstood tiefling, a lordly high elf, maybe even your perfect digital partner. You can have a tail or demon horns. Developer Larian knows what you’ve been doing in the character creator. It’s, uh… Well, it’s just some dude.

Larian has analytics running in this Early Access build of Baldur’s Gate 3, which help the devs understand how the game is being played and how to improve it. That system can track which options everyone is choosing in character creation, and the devs decided to put together a Frankensteinian monster made up of all the most popular choices.

“We took the most popular choices in character creation, and recreated this,” the devs say, sharing the image above. “We thought our analytics system wasn’t working! We checked. It is. Congratulations, you’ve basically made the default Vault Dweller. What the hell guys. We gave you demon eyes, horns, and even tails. We are sorely disappointed. Go crazy. We worked hard on this!”

Listen, there are Baldur’s Gate 3 races besides humans, folks. You can use them. It’s fine.

The crux of today’s announcement is actually the latest hotfix, which addresses another handful of crashes, as well as “an error where people were stealing from merchants by directly equipping the stolen items out of their inventory”. You’ll have to be sneakier to be sneaky now, I suppose.