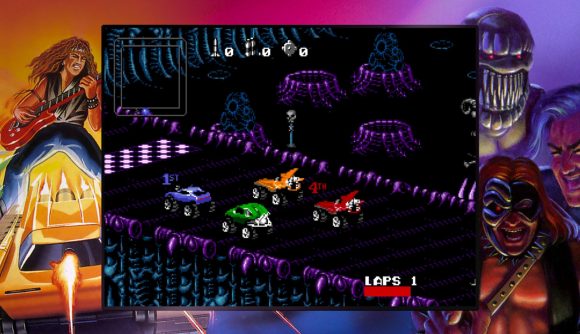 Last night, Blizzard surprise launched the Blizzard Arcade Collection, a package containing The Lost Vikings, Rock N Roll Racing, and Blackthorne, three of the company’s first games. If, in your excitement to check them out, you intend to stream them, be wary, as Rock N’ Roll Racing could yield a DMCA strike.

Adam Fletcher, a community development lead at Blizzard, tweeted a PSA on the racing game sometime after the reveal, warning against playing it on Twitch with the volume up. “If you stream Rock N Roll Racing from the Blizzard Arcade Collection, the game has a soundtrack of licensed music which is not cleared for streaming,” Adam’s tweet reads. “If you choose to stream, please do so with the music turned off.”

Rock N Roll Racing features 8-bit covers of a bunch of heavy metal and rock classics, including Black Sabbath’s ‘Paranoid’, Deep Purple’s ‘Highway Star’, and, of course, Steppenwolf’s ‘Born to be Wild’. Unfortunately, in an age where in-game sounds of wind and police sirens can tick off the algorithm for copyrighted sound, retrofied covers of dad rock isn’t all that surprising, though no less ridiculous. Fletcher’s advice is the same as Twitch’s, when this started becoming egregious late last year.

On the topic of 8-bit tunes, during BlizzCon itself, it seems Metallica’s performance was overdubbed by chiptune folk music during a Twitch Gaming stream, because we live in the silliest timeline.

PSA: If you stream Rock N Roll Racing from the Blizzard Arcade Collection, the game has a soundtrack of licensed music which is not cleared for streaming.

If you choose to stream, please do so with the music turned off.

If you preordered any of Blizzard’s Digital Anniversary bundles, you’ll get Blizzard Arcade Collection for free, otherwise it’ll run you around $20 on PC or consoles. BlizzCon also gave us the official reveal of Diablo 2: Resurrected, a trailer for the new Diablo 4 Rogue class, the next Hearthstone expansion, and the first major update for World of Warcraft: Shadowlands.